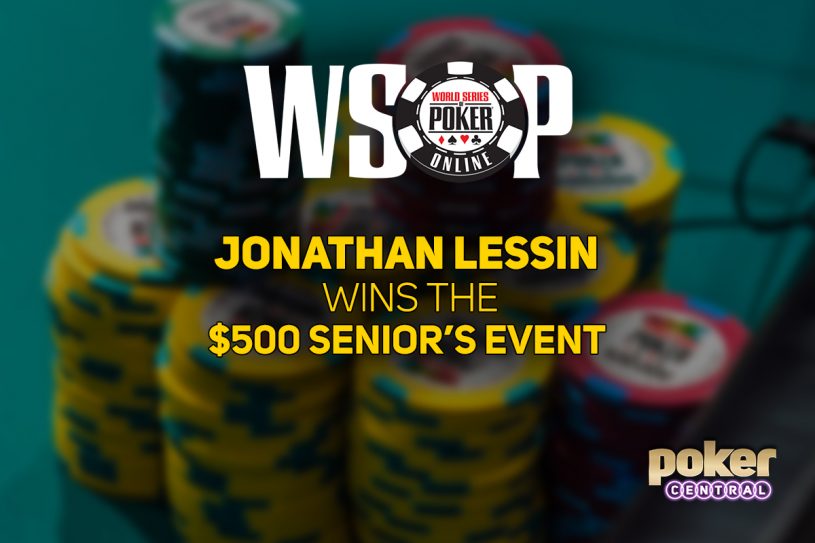 The penultimate event of the 2020 World Series of Poker Online continued on Thursday with Event #30: $500 Senior’s Event attracting a 720-entrant field which created a $324,000 prize pool. After nearly 11 hours of play, it would be New Jersey’s Jonathan “SugarJ” Lessin collecting the $64,411 first-place prize and his first WSOP bracelet.

Allen “Nucman” Pock began the final table as the chip leader, and immediately extending that lead when he sent Al “BigAl16” Riccobono out in ninth as Riccobono’s ace-ten failed to improve against Pock’s ace-king. Carmen “cjdstable” Dimaria saw her pocket jacks cracked by Brian “ggtdm” McGill’s pocket tens, before Michael “bigfatpirate” Whidden and their ace-king was outdrawn by the queen-nine of James “muskrrr” Moore. Stuart “dusty16” Kemble would fall in sixth place losing king-five to the king-queen of McGill before Gregory “gwitsch” Witsch lost with ace-five to Pock’s ten-nine. After Pock exited in third, Moore entered heads-up play with a six-to-one advantage – and amazingly was playing for his third WSOP Senior’s bracelet after winning the Super Seniors in both 2016 and 2017. However, Lessin managed to take the lead before the final hand saw Moore shove the flop with ace-high and Lessin called with two pair and improved to a full house on the turn to be crowned the Event #30 champion.

Ian “ApokerJoker2” Steinman has moved into the lead ahead of Ryan “im.sorry” Torgersen. Robert “BustinBalls” Kuhn has dropped to third overall, and William “SlaweelRyam” Romaine and Philip “tomte” Yeh round out the top five. To view the full leaderboard, click here.