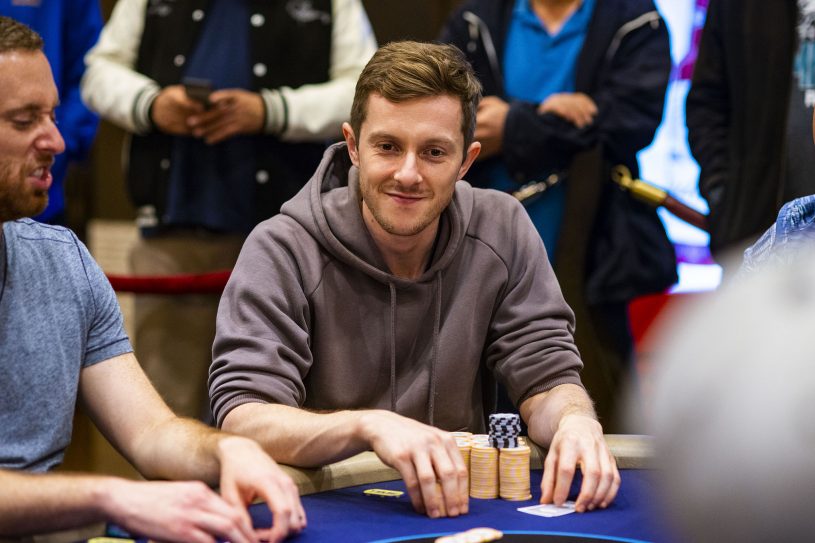 Players travel from all over the globe to play a World Poker Tour event and the recent WPT Gardens Poker Championship is no different.

Despite being a new addition to the World Poker Tour, the WPT Gardens Poker Championship attracted over 250 players back in January, building a prize-pool of over $2.5 million. On Wednesday 12th March, the final six players will take to the felt at the Hyper X Esports Arena in Las Vegas to see who will lift the trophy.

A LONG JOURNEY TO LAS VEGAS

One man who has travelled further than most is Belgian player Jonathan Abdellatif. Coming into play as short stack, Abdellatif has just 18 big blinds to play with, a far cry from chip leader Frank Stebuchin’s 135bb monster stack at the top of the chip counts. But the man from Aalst in Belgium has every reason to be confident he can turn things on their head.

“I’m excited for the final table. I’ve done a lot of work on my game. I decided to get some coaching and look at some stuff that I normally wouldn’t as a PLO player.” Says Abdellatif,  I play from the gut, but I figured as we’re there [at the final table] I might as well do it professionally and ask a few guys to guide me.”

Here’s what Abdellatif and the five others are playing for at the final table.

Abdellatif may be aware he’s the short-stack but believes he has the mindset and strategy to come back into the reckoning.

“The work we’ve been putting in has revolved around me being the short stack. As a PLO player, we found out using solvers that my post flop and deep stack play is pretty good.”

Pot Limit Omaha and Hold’em are such different disciplines, but Abdellatif is comfortable going in as the underdog. He knew what he needed to work on.

“I wasn’t totally adapted to short stack situations. I have no expectations, but I’m fully armed with the right ranges so I’m going in with confidence. Whatever will happen will happen.”

Read all about one of Abdellatif’s biggest problems at this final table: The story of chip leader Frank Stepuchin can be found right here.

There has, of course, been a six-week hiatus, and Abdellatif wasn’t the best prepared for it, unaware of it on Day 1. But after using it well, he thinks it’s a good idea by the World Poker Tour.

“I don’t think t’s a bad thing at all. The more coverage the better it is, more exposure is better for everyone.”

Abdellatif’s results have been excellent in recent years, with his biggest result being an 8-max side event in Nottingham two years ago for £215,000 ($282,851). Because it was playing parallel with the Main Event in the same festival, it hardly received any coverage.

“It was a lot of money, but no-one cared about that tournament. I’ve had way smaller wins that have been covered more, but my biggest win went under the radar, it was pretty strange.”

Abdellatif got to share the final table with a friend, a dynamic he enjoyed, and it was he who came out on top with bragging rights.

“Winning it was great and it was fun because I was at the final table with a friend, Usman Siddique.  There was a healthy competition between both of us and it pops up a lot when we talk!”

KICKING OFF THE YEAR IN STYLE

This year has already seen Abdellatif finish runner-up in an Aussie Millions PLO event, and his tournament earnings in the past 12 months total over $500,000. But despite his recent success, the Belgian’s feet are clearly on the ground.

“I’m a decent player and I’ve done well but I’m realistic to know that I’ve ran well. People procrastinate putting work in [on their game] and just play. But I took time to step back and work on my game.”

Abdellatif is a man motivated by self-improvement and that extends to his feelings about Las Vegas itself. From arriving as a wide-eyed young man to learning to dislike the Strip and associate it with losing money, he’s come full circle to appreciating that Sin City has tournaments no other city in the world hosts.

“I realized its what you make of it. When you go for the tournaments and create a nice atmosphere for yourself it’s actually a pretty nice town. I like going there now and I’ve completely rid myself of negative thoughts. If you go anywhere with a negative state of mind, it’ll never get better.”

Abdellatif is the outsider in terms of chips, but he has put the work in during the hiatus. Will he get the chance to shine in just a few days time?

With Wednesday’s winner guaranteed a massive $548,825 top prize, along with entry into the season-ending $15,000 WPT Tournament of Champions, there is everything to play for and nothing to lose for the man from Belgium. He may just be one to watch at the final table when cards are in the air, and you can watch every hand live and exclusive on PokerGO by subscribing now.