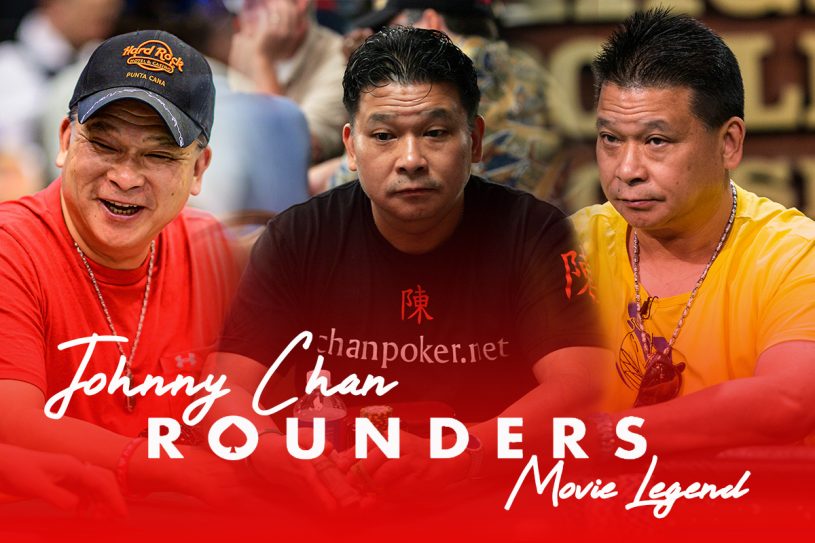 Johnny Chan is a poker legend on and off the felt!

“The whole place stops when Johnny Chan walks in.”

If you think of a poker movie, then there’s a very good chance you’re thinking of the 1998 film, Rounders, starring Matt Damon and Ed Norton in the iconic roles of Mike McDermott and ‘Worm’. But if your mid drifts to other characters in the movie, you might just as quickly picture the real-life poker hero who makes a legendary cameo without speaking a word in the movie.

Here’s the scene in question:

SITTING WITH THE CHAMP

Johnny Chan is a name that has been synonymous with poker since the ‘Orient Express’ won his maiden WSOP Main Event back in 1987 for $625,000. Johnny Chan’s role in Rounders is playing himself, sat in a cash game rather than the World Series of Poker, giving out some Johnny Chan poker lessons to starstruck whales. That is, until Mike McDermott walks in, sits down with $6,000 at blinds of $300/$600 just so he can take on the iconic poker player, Johnny Chan.

As he later tells Joey Knish, played by the superb John Turturro, he wanted to see if he could outplay Johnny Chan in just one hand. And he did, he tells his sometime mentor proudly.

WHAT MAKES THE SCENE SO SPECIAL?

McDermott’s pride at having outplayed Johnny Chan with rags is self-evident. But the way it’s filmed, the raise, the re-raise, the four-bet, the five-bet (presumably a shove given McDermott enters the hand with a maximum of 10-15 bigs) and the fold from Johnny Chan is masterfully put together.

The whole movie Rounders is special in itself and we put together a few reasons why it was so successful right here when it recently returned to Netflix.

The delicate balance between showing too much poker or too little poker in a scene that centers on the minutiae of a hand was a tightrope to walk. Brian Koppelman deserves a heap of credit for doing just that in the script, although in the original draft, as he wrote about last year, the credit went to director John Dahl “who realized that the symmetry would be better if after watching Johnny Chan, [McDermott] bluffed Johnny Chan, not Phil [Hellmuth].”

Yes, that’s right, it was originally going to be Phil Hellmuth sat at that table at the Mirage. While the scene was only a footnote in the incredible life of Johnny Chan, it was undoubtedly a major draw to the movie-going public to see McDermott taking on the best – and Johnny Chan’s legend was bigger than anyone’s at the time.

AFTER THE RED CARPET

Johnny Chan continues to attract attention from the poker-playing in ways that few players have ever or will ever attain. Having won over $8.7 million at the felt in tournaments alone, players will still visit Vegas purely in the hope that they get sat at his table in the WSOP Main Event, maybe even that they bust to him so that they can go home proud, telling friends and family that at least they busted to a two-time winner and poker legend.

While Johnny Chan has built his career on the back-to-back wins in 1987 and 1988, coupled with the oh-so-close runner-up finish to Hellmuth in the 1989 Main Event, he has enjoyed plenty of success in other events. His biggest ever cash is neither of his WSOP Main Event victories, but instead, a runner-up finish in the Poker Superstars Invitational Tournament that took place in Caesars Palace, Las Vegas in 2005. That heads-up defeat to Gus Hansen earned the Orient Express $750,000, and was in the same year that he won his most recent WSOP bracelet, taking down the $2,500-entry Pot-Limit Hold’em event for $303,025.

When it comes to Johnny Chan, even other poker legends look up to him. Just recently, he won the Global Poker ICON Award, something his fellow professionals were only too happy to see.

You can, of course, watch the whole of the 2019 Global Poker Awards ceremony which took place in Las Vegas on March 6th right here on demand. If you subscribe to PokerGO today, you’ll have 24/7 access to the best poker content in the world.