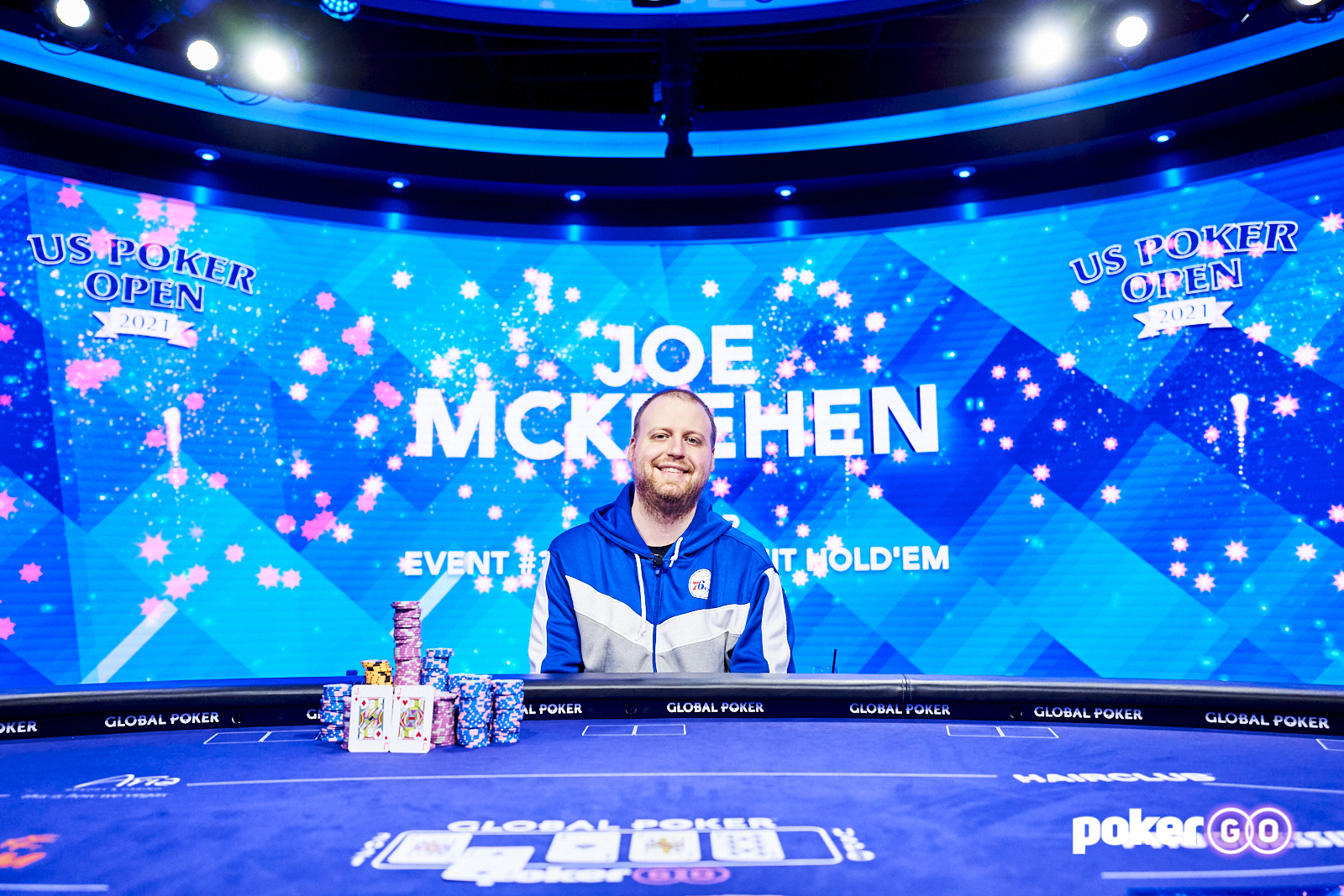 Joe McKeehen did not take it easy on his six opponents at the final table of 2021 U.S. Poker Open Event #3: $10,000 No Limit Hold’em as he turned his chip lead into a $200,200 win. McKeehen, a former WSOP Main Event winner, sees himself jump up the Championship standings as he’s now in second place and in strong contention for the gold eagle trophy and $50,000 cash prize.

The first player to hit the rail was Barry Hutter who finished third in Event #1 just two days ago. On his final hand, Hutter raised to 400,000 at 40k/80k blinds leaving himself with just 160,000 behind with jack-ten offsuit. Chip leader McKeehen called with two black kings and the flop brought came down jack-high on which Hutter moved all-in. The turn and river did not help Hutter and his elimination boosted the former World Champ’s chip lead even more.

Justin Saliba was next to go after shoving his last 4.5 big blinds into the middle holding king-five of hearts from the small blind. McKeehen made the call with jack-nine offsuit from the big blind and the board gave him a pair of nines for the knockout. A very long lul in the action was finally broken when Jake Schindler found himself all in, after having been short for quite some time, with jack-nine suited. Schindler was up against Ali Imsirovic who tabled ace-ten. The board ran dry for Schindler who busted in fifth place.

Two-time WSOP bracelet winner Steve Zolotow busted in fourth place, adding to his U.S. Poker Open points total and boosting him into fourth place on the current standings. Zolotow was down to just a few big blinds when he ended up all in with nine-five suited and he was not able to hit a pair versus the king-eight offsuit of McKeehen.

Today’s event ended with a bang as the final two hands were thrilling! First, Imsirovic had Qartomy all in with ace-nine versus fours but the board ran dry giving Qartomy a double up. Imsirovic was left with just 1 big blind and on the very next hand, McKeehen raised with jacks before Qartomy moved all-in holding fives and Imsirovic tossed in his final chips. McKeehen snap-called putting both his opponents at risk and he closed it out in style by hitting quads!

The full results of this event are as follows.

The 2021 U.S. Poker Open continues right now as Event #4: $10,000 Big Bet Mix is in full swing. Check out our Live Reporting right here and tune into the final table of that event at 1:00 pm PT on PokerGO. Here are the Top 10 of the Championship Standings.