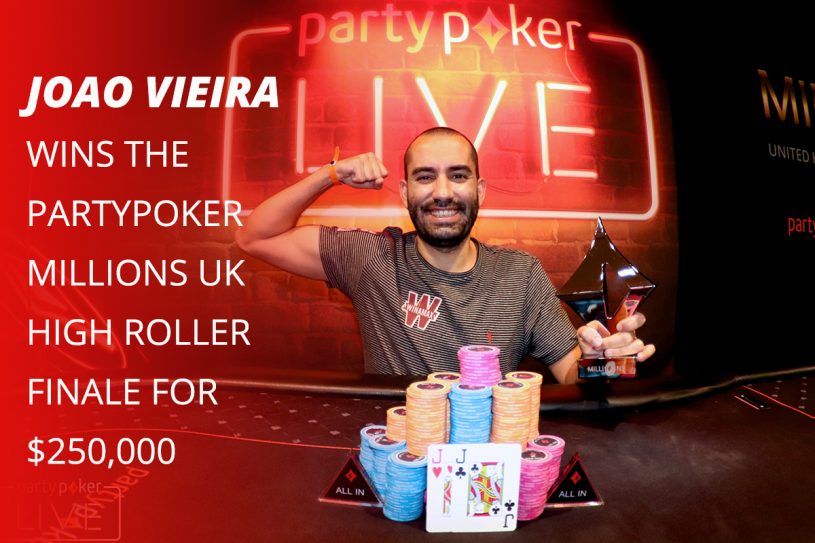 Kahle Burns was close to winning his second high roller of the week at the partypoker MILLIONS UK, but in the end, it was Joao Vieira to take home the top prize. Beating a field of 95 entries, the Portuguese high roller crushed the final day of the event, sending players home left and right and taking no prisoners at the final table.

Vieira won $250,000, one of the biggest scores of his career. After winning his first bracelet at the WSOP last summer, this is another crown achievement for the gifted poker player. Relive the Poker Central Live Reporting right here.

The High Roller Finale at the partypoker MILLIONS UK started its last day with 17 players remaining and 13 making the money. Where some might have expected a long bubble, the reality was much different. Before the first level was over, the event was in the money with Marcel Luske the first to leave. As Daniel Rezaei followed, and Bruno Fitoussi and Tibor Nagygyorgy busted in the same hand,  the players were in the money.

Sirzat Hissou and Kristen Bicknell followed before the last table was set. partypoker’s own John Duthie, one of the big stacks coming into the day, finished in tenth place after an audacious bluff against Vieira went awry. Duthie needed a club on the river after his semi-bluff was called, and ended up short with an off-suit jack completing the board.

With nine remaining, the tables merged, but the official final table wouldn’t be set until one more player exited. partypoker’s Anatoly Filatov shared that he really wanted to be in the official final table photo, he did end up with his head on the chopping block before the flashes would brighten the tournament room. Vieira collected another scalp in Filatov when the former’s ace-seven beat the latter’s seven-eight suited.

Fahad Althani left soon after play resumed. His king-queen wouldn’t hold against Igor Kurganov’s jack-eight with the Russian high roller making a straight on the river.

Kurganov eliminated another player in Michael Sklenicka, again with a slightly inferior hand. Sklenicka’s ace-deuce was beaten by Kurganov’s queen-jack when a jack appeared in the window.

While Kurganov was responsible for the first two eliminations, he himself would end up going out next. He started the day as chip leader, but by the time it was six-handed, he had to leave the top position to Vieira and Burns. It would be Burns to eliminate Kurganov in a classic set up. Kurganov raised with kings, Burns flatted with aces, and Vieira squeezed with queens. Kurganov shoved, Burns shoved, and Vieira got away from the ladies. Kurganov took home $55,000 for his efforts after a board full of blanks.

Another partypoker PRO in Joao Simao went down with ace-four to Alex Foxen’s ace-jack to make the tournament four-handed. While things had gone quickly up until then, the stage with four players remaining took hours.

Three one-hour levels later, Joni Jouhkimainen met his Waterloo. The Finish partypoker PRO was short and took his chances with ace-jack suited against Vieira’s pocket threes. With Vieira flopping an open-ended, Jouhkimainen lost some outs and never hit on the turn or river.

Foxen followed almost right after. The 2018 and 2019 GPI Player of the Year ran ace-queen into Vieira’s queens, and just like that, the tournament was heads-up.

Vieira started with a two-to-one chip lead and never relinquished. He took an even more substantial lead, winning the first two hands, leaving Burns short. Within the hour, it was all done as Burns shoved over a Vieira limp. The latter had just called with jacks and called Burns’ shove instantly. Burns showed ace-deuce and hit a pair of deuces on the flop, but the jack that came along put Vieira in the driver’s seat. After a blank on the turn, it was all over, and Burns and Vieira shook hands.

Having won the $25,500 Super High Roller earlier, this time, Kahle Burns had to make do with the runner-up position, good for $165,000. Joao Vieira took home the $250,000-first place prize and the trophy. What a start to the year for the Portuguese high roller!