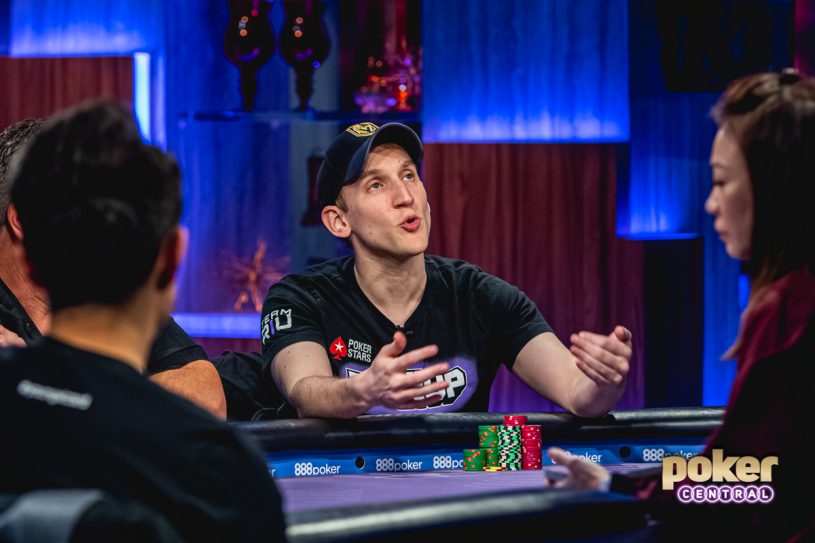 Jason Somerville in action during "Run it Up" week on Poker After Dark.

Jason Somerville is a man of many talents and interests and this week he’s putting, arguably, his first big love on display inside the PokerGO Studio as he plays on Poker After Dark for the very first time. Prior to “Run it Up” week getting underway, we caught up with Somerville to talk about everything he’s working on right now.

Run it Up Week on Poker After Dark

As most poker fans and players, Somerville grew up in the game being a huge fan of Poker After Dark and stepping into the PokerGO Studio seeing the branding of the show alongside that of his baby, Run it Up, generated some special feelings inside of him.

“I’m really excited for this,” Somerville said as he picked up the speed and got comfortable in his usual fast-paced speech, “I’ve been a fan of Poker After dark since I was a child, a teenager actually, back when it was first on TV. I’ve seen I think every single episode and I still watch it to this day. I think that the videos of Poker After Dark will be around for hundreds of years and people will always love watching them.”

Bringing his friends into the PokerGO Studio is special for Somerville who expects the game to play like a homegame but at stakes far greater than most games between friends. “Run it Up” on Poker After Dark is a $10/$25 No Limit Hold’em game which you can watch live on October 8 and 9 on PokerGO or on-demand whenever it suits your schedule.

On his own Twitch channel, the place where Somerville grew his fanbase after starting out on YouTube, Run it Up recently saw the debut of “Chat Plays,” an interactive poker viewing experience that has the fans vote on the actions of one player. Somerville dubbed himself as more of a “game show host” in the role as commentator on these streams which, in his vision, have the ability to entertain and educate at the same time.

“On my streams, the people in chat always knew best,” Somerville laughed, “and now they get a chance to really show their skills on ‘Chat Plays.’”

“I’m very bullish on this format and I hope to take it to international markets because the fan reaction has been very positive.”

Run it Up Reno

At the conclusion of two nights of Poker After Dark on PokerGO, the entire lineup will travel to Reno for another edition of Run it Up Reno at the Peppermill Hotel & Casino. This series of low stakes events with a $600 Main Event in Northern Nevada has been a fan favorite of Somerville’s stream fans along with celebrities such as Survivor winners Tyson Apostol and Boston Rob while also having UFC fighters Martin Kampmann and TJ Dillashaw compete in his events in the past.

For this edition, Somerville is offering 11 straight days of poker action ranging from a $125 No Limit Hold’em Bomb Pot tournament to a $1,100 Thursday Thrilla bounty event and from a $120 N.O.R.S.E. mixed game to a $125 5-Max Taiwanese Double Board tournament.

“This will be the biggest Run it Up Reno we’ve ever had, and I say that every time and it’s awesome to say that it’s come true every time,” Somerville said.

During this event, in particular, Chris Moneymaker will stop by to give away the first Platinum Pass for PokerStars’ second edition of the PokerStars Players No-Limit Hold’em Championship which is to be held in Barcelona in 2020.

“Our schedule is jam-packed with cool things. The tournaments at this point are like clockwork. In the first three years of running the event, I felt the stress every single time. At this point, we show up. Everything is smooth and the people at Peppermill do a great job.”

Headed to #runitupreno next month? Plan on attending our Cash Game Hangout with @andymilonakis! Come play some 1-2 NLH with straddles and bomb pots. Our early sign up list will be open soon! runitupreno.com (link in profile)

“The fans have a good time. The tournament structures are all fun friendly. We still have so many first-time players come in every single time, and I love to hear that. People tell me they only play live poker when they come to Run it Up Reno and for some, it’s even the first time they ever played live. I love that we have that environment and also that we’ve now built this reputation that even high stakes players come to play also.”

Among those that have confirmed to be playing Run it Up Reno are Jamie Kerstetter, Andy Milonakis, Brad Owen, Andrew Neeme, Jesse Sylvia, Joe Stapleton, Norman Chad, Joey Ingram, and Johnny Vibes.

Lastly, the avid sports bettor teases some exciting action that’s coming to his Twitch channel in the future as he’s going to be streaming five Thursday Night Football games where he will be providing commentary and he promises more information is to come out soon.

“I will be co-streaming those starting in November and it’s really exciting because I’ve never done commentary on anything other than poker.”