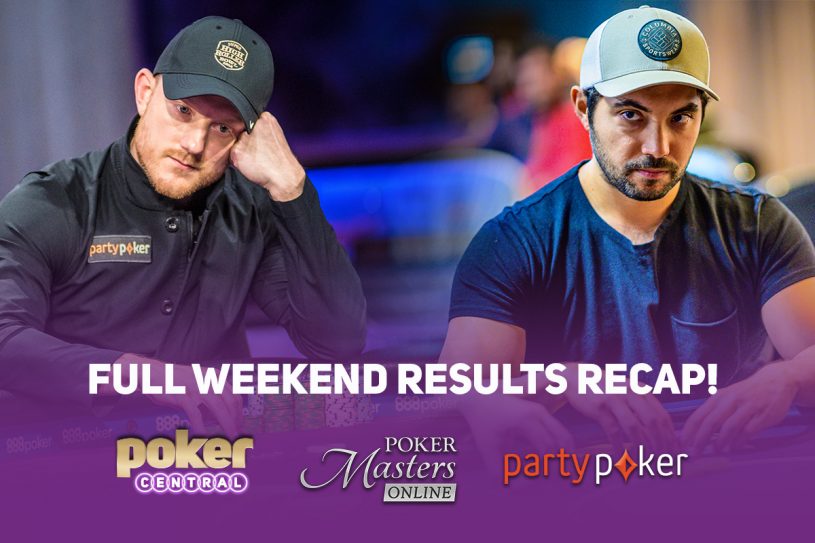 Poker Masters Online on partypoker continues to blow its guarantees out of the water with Jason Koon and Timothy Adams getting wins over the weekend.

The Poker Masters Online action on partypoker continues to draw big numbers and this weekend the total paid out prize money vaulted to $17.7 million with 12 events left to be played! All the final table action was covered on the PokerGO Facebook channel and you can relive the action right here as Mustapha Kanit, Timothy Adams, and Jason Koon locked up big wins. Greece’s Alexandros Kolonias took the lead on the Championship standings as he’s the front-runner to take home the $50,000 top prize and the coveted Purple Jacket with 12 events left to be played.

The Poker Masters Online has a night off today and the Top 10 of the overall Championship is now as follows. A total of 99 unique players have now recorded at least one result in this series for a total of $17.7 million in prize money paid out.

Going back to Friday night, Hungary’s Laszlo Bujtas took down the $10,000 Pot Limit Omaha event for $272,141 beating Canada’s Ami Barer heads up. Jorryt van Hoof recorded another cash, finishing fourth, and along with a ninth-place finish in Event #15 and fourth in Event #17 he now sits sixth on the overall standings with seven total cashes for $527,712. Event #12 had 87 total entries creating a prize pool worth $870,000 and former Championship leader Andras Nemeth recorded a min cash to bring his total results to five.

The action on Friday night was capped off by Dutchman Luuk Gieles who took a commanding chip lead right after the money bubble burst and he never let go of said chip lead. Timothy Adams, who made his way into the money with the shortest stack, mounted an impressive to find himself heads up roughly an hour later. Relive this final table on Facebook right here with commentary provided by Jeff Platt and Remko Rinkema. This event had 68 total entries creating a prize pool worth $680,000.

Saturday night saw Mustapha Kanit record his first cash of the series and he immediately made it a big one by defeating a field of 114 entries. Kanit took the lion share of the $1,140,000 prize pool after defeating current Poker Masters Championship leader Alexandros Kolonias heads up. Artur Martirosian gathered valuable points with his third-place finish as he managed to climb up to third on the overall standings.

Event #15 had 78 total entries and Timothy Adams continued his strong streak by winning this one after defeating a truly epic final table. After Alexandros Kolonias departed in seventh place it was former Purple Jacket winner Ali Imsirovic who busted in sixth followed by Ben Heath, Alex Foxen, and Dario Sammartino. Adams collected another $243,988 payout, putting him within striking distance of the Championship lead, just one min cash behind Kolonias. You can catch the final table action of Event #14 and #15 on the PokerGO Facebook page.

On Sunday all three events were heavily contested with Jason Koon winning the biggest single prize. Koon, recording his first cash of the series, won the $25,000 No Limit Hold’em event that had a total of 72 entries creating a $1.8 million prize pool. Koon squared off at the final table against familiar opponents such as Steve O’Dwyer and Justin Bonomo who finished second and third.

Everyone’s four-card favorite was back on the menu on Sunday as well, this time attracting 92 entries for a prize pool just shy of a million dollars. As usual, Finland was heavily represented with the entire final table hailing from Europe. After a German, Norwegian, and Dutchman busted it was two Fins and a Swede battling over the $287,781 top prize. Eelis Parssinen ultimately beat Bengt Sonnert heads up and his third cash in the series bumped him into fourth on the overall standings.

Closing out a big night of Sunday action was a $10,000 No Limit Hold’em event with a fast structure. Arguably one of the most successful online tournament players of the last five years, Linus Loeliger, made his first Poker Masters Online final table appearance and closed it out in style. Artur Martisorian collected another great result vaulting him into third on the overall standings. This event had 104 total entries creating a prize pool of $1,040,000. Watch all the Sunday night Poker Masters Online action on the PokerGO Facebook page.