You are here
Home > News > Why Did Jason Koon Open Up About His Poker Strategy? 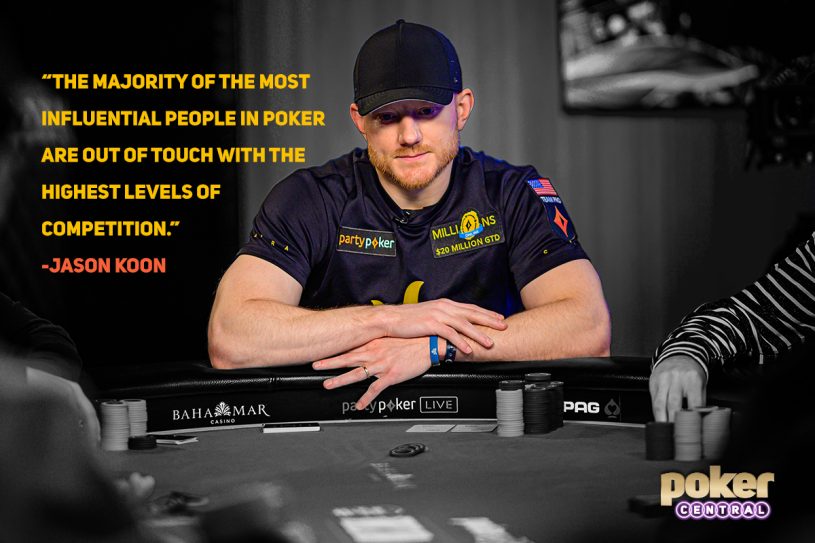 Jason Koon dives deep into his thought process and why it's import for the world to understand what goes on inside the minds of top pros.

Jason Koon made headlines this week by writing one of the most talked-about poker blogs the industry has seen by giving a play-by-play breakdown of his thought process during poker hands. In light of this blog, we spoke to Koon about his reasons to write this breakdown and what he thinks the future of poker at the highest stakes will look like.

As a refresher on how Koon broke down his thought process, he said the following in his blog on what exactly goes on inside his head during a poker hand.

“Players competing at the highest levels in poker are faced with similarly complex situations that are difficult to solve, and often it’s challenging to understand what these players are thinking about without a fundamental understanding of game theory. Now, a brief look into my thought process during one of these 10-30-second decision points:

The thoughts Koon laid out are fascinating, in some ways straight-forward, but also very revealing about the way the game is being thought about by those that are playing for millions of dollars on a regular basis. So why did Jason Koon decide to lay this out for everyone, his closest rivals included, to read and absorb?

“I tend to completely stay out of the way of most poker discussions and debates. I feel that it almost always ends up being something that isn’t worth the effort and or headache. The problem is that the majority of avid poker fans and players receive the same input from a few of the usual poker influencers. The majority of the most influential people in poker are out of touch with what the highest stakes are really about. People tend to default to the same assumptions and insults: These guys are just robots, today’s modern player is boring, and they are too slow.”

Koon has been playing poker since 2008 and has seen it transform from a feel game with moves and tricks to “one of scientific precision and robotic execution.” While some players might miss the “good ‘ol days,” Koon believes that the game is more beautiful than it’s ever been and him speaking up is part of the reason to shed light on this from his perspective.

“I’m not here to debate who or what makes for the most entertaining poker programming, I’m just saying this is how it is going to be at the most competitive level from now on because yesterday’s player cannot win vs the new-age top tier player.”

Koon wants poker fans and players to know that he wants the game to grow and that anything positive geared towards the game is highly appreciated, but at the end of the day, they are playing for a living in a game they spent thousands of hours working on.

“We can’t always be the characters they want us to be,” Koon elaborated. “We are often tired, under immense amounts of stress or just needing to focus insanely hard to be able to compete vs the other top guys; usually it’s a combination of all three. Most of us want what is best for the poker world as a whole, and we are humans. Even if we don’t scream or celebrate loudly we feel every single emotion that one would imagine us to feel.”

Poker is Not the Game it Once Was

These open and honest insights provide so much more context than we, the public, have on the thoughts and feelings of those we watch compete in the Super High Roller Bowl or at World Series of Poker. Stoic, focused, determined, and blending a plethora of factors into quick, efficient, and profitable decision-making is easily understated by those consuming the content and the words Koon speaks are the first of its kind with this level of depth.

“My intention for the breakdown wasn’t to overwhelm people or let the novice player know how far they are behind; My entire point is to show that we are computing so much data on every street that it is almost impossible to wrap your head around. Almost no top player’s play slows down to just balance their range or to be annoying. They are playing absurdly fast, given how much information they are processing at once.”

As referenced in Koon’s blog, the way we consume poker content has also drastically changed since Chris Moneymaker turned a $45 satellite into millions of dollars and eternal poker fame. When Moneymaker pulled off the unthinkable, poker was filmed and broadcast in a documentary-style broadcast where only the tensest and most exhilarating moments were shown as opposed to 12 hours a day of live-action streamed on PokerGO or other live streaming platforms where every second of play is being shown as the best of the best battle each other in a game that’s also almost unrecognizable from what it once was.

Koon himself said this, “I can tell you from personal experience that the Jason Koon of six years ago played, on average, much faster per street than the Jason Koon of today. I played more quickly because the decision points felt simpler to me — the reason why is because I wasn’t playing the same game that I’m playing today.

What I am trying to convey is that the game we are playing today is much different than the game we were playing years ago. The best players in the world are deliberate because the best plays require deliberation. This is what poker at the highest levels looks like, and that isn’t going to change.”

So what’s on the steep ladder that is the evolution of poker strategy and competition?

“All the top players are implementing their best effort at GTO strategies, that said, none of us are playing anywhere near as good as the bots are. Tools to learn will continue to get better, and because of this, players will also. That said, we are a very, very long way away from a person playing anywhere near perfect GTO poker.”

Read the full blog on the partypoker website right here. Watch Jason Koon in action at the final table of Super High Roller Bowl Bahamas right here on PokerGO. Jason Koon and Greg Merson talked about the sacrifices they made for the game of poker on an episode of Real Talk which you can find right here.