You are here
Home > News > James Holzhauer Tries Not to Suck, Williams Talks Binions and Seidel is a Teamster 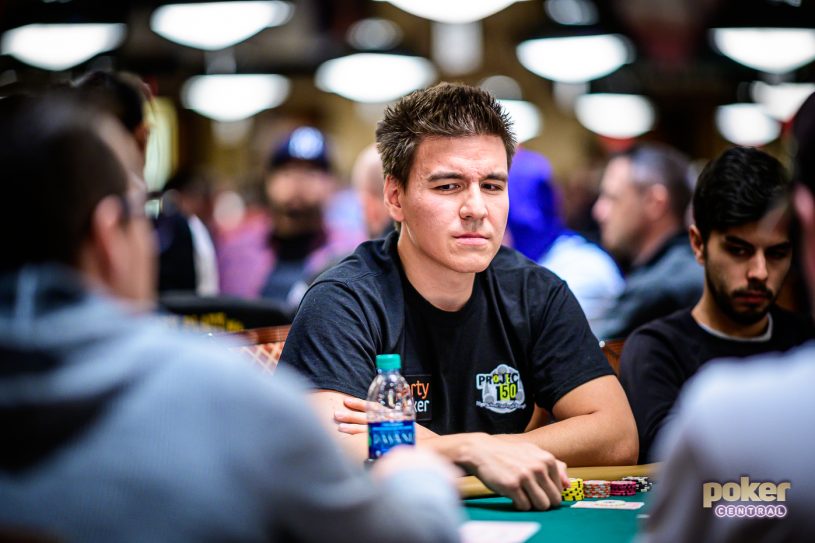 James Holzhauer at the 2019 World Series of Poker Felt

Whether you’re one of the best players in the world, today was a very special day at the 2019 World Series of Poker, with the $50,000 Poker Players Championship kicking off at the Rio All-Suite Hotel & Casino.  With Jason Mercier returning to the felt in dramatic fashion and legends of the game at every table, it’s must-play for those with the bankroll to cope. Other stars of the TV screen and poker felt combined to make this one of the most fun days of the summer so far.

In the immortal words of Joe Maddon, try not to suck. #WSOP pic.twitter.com/RrXyeJXlhx

…but left it soon after with the best consolation prize of all waiting for him back home. Nawww…

I lost on purpose because my daughter wanted me to come home. https://t.co/5tjCuPRcZ4

SCHULMAN TRIES NOT TO TORCH CHIPS

Nick Schulman knows a good look when he sees one, and Nick Schulman definitely knows this is not a good look. Good news for him is that the ‘baggy’ look is due back on trend within 50 years.

If 1997 me shows up in this 50k PPC tomorrow on God it will be a stone cold rap, for my chips that is I will torch them off like I do every year lol. I ask for the poker heavens to shine upon me 1 time, and deem me worthy of their blessings. GL to the crazed mixed game warriors pic.twitter.com/b5YBiohA7Q

WILLIAMS WISTFUL ABOUT POKER PAST

Magic the Gathering turned poker legend David Williams can remember when things were even more cramped at the WSOP venue.

True story: 2004 WSOP Main Event at Binions they weren't prepared for the post Moneymaker rush and we started 11 handed at a table outside on freemont street. https://t.co/BEBtHqf3Qb

SEIDEL DOES IT FOR THE TEAM

Erik Seidel summons memories of the Mayfair Club as he tries not to let his teammates down.

Starting tag team @Farah_Galfond , @PhilGalfond , @mkonnikova We are the New York Nits.
We need some jerseys

GLANTZ EXCITED ABOUT THE PPC

Matt Glantz juts couldn’t wait for the $50,000 Poker Players Championship to get underway.

In every game or sport, the greatest thrill is playing against the very best in the world.
The 50k Poker Players Championship @WSOP comes once a year. It's where and when the world's elite players compete in a select variety of poker disciplines.

TEAM BAKER JUMP TO TOP OF THE LEAGUE

After a swingy last 48 hours in the $25k Fantasy League, Team Baker have risen highest, thanks in no small part to their cheapest purchases, with Ari Engel and Shannon Shorr both costing just a dollar. Between the two of them, they’ve racked up 252 of Team Baker’s points. Here are how their top five players stack up.