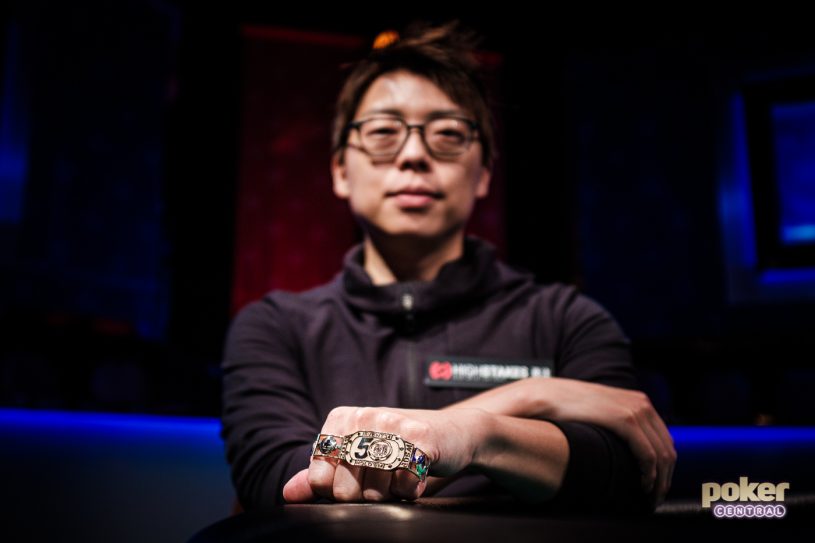 Unflappable might be the best way to describe the latest World Series of Poker bracelet winner Joseph Cheong. Cheered on by those on the rail and on Twitter, Cheong was quite possibly the 84th happiest person with his own bracelet win in the $1,000 Double Stack No Limit Hold’em event.

“It feels good, having a lot of people root for me but I don’t really have a broad range of emotions,” Cheong said.

While him being the 84th happiest person in the room might’ve been a bit of an exaggeration, as Cheong did indeed produce a big smile as he won the final hand, he was also extremely calm about his first big win in many years.

“God, I wish I could be excited like I used to be,” Cheong said. “I’m a little bit jaded, I’m just happy it got me out of the hole and now there’s less pressure on the rest of the summer and the rest of the year.

Cheong was having the first losing year of his lengthy poker career to this point, but the $687,782 be collected today more than made up for it. Despite it being a losing year so far, Cheong’s been trending up as a poker player after losing his passion a few years ago.

“I had not been playing much poker between 2014 and 2017 and I was definitely getting worse at poker during that time. I used the last two years to pick up studying and playing a lot more and it feels good to get this win now.”

To date, Joseph Cheong has just shy of $14 million in career tournament earnings, his claim to fame being a third-place finish in the 2010 Main Event for $4.1 million behind only Jonathan Duhamel and John Racener.

After his big Main Event score, Cheong played a ton of poker all over the world stringing together result after result but even through a rough stretch he always kept his head up.

“It’s hard to stay motivated when you’re losing, but I love playing. I don’t mind playing every single day.”

Looking into the near future, Cheong is hoping to parlay his big score into much bigger scores as he now eyes the $25,000 Pot Limit Omaha High Roller and $50,000 No Limit Hold’em High Roller that are on deck at the World Series of Poker.

“This score will help me fire bigger the rest of the summer and hopefully I can chain a run together like Justin Bonomo did last year. If I win more, I’ll be parlaying that pretty hard.”

Watch the World Series of Poker on PokerGO and CBS All Access in 2019. New to PokerGO? Subscribe right now.