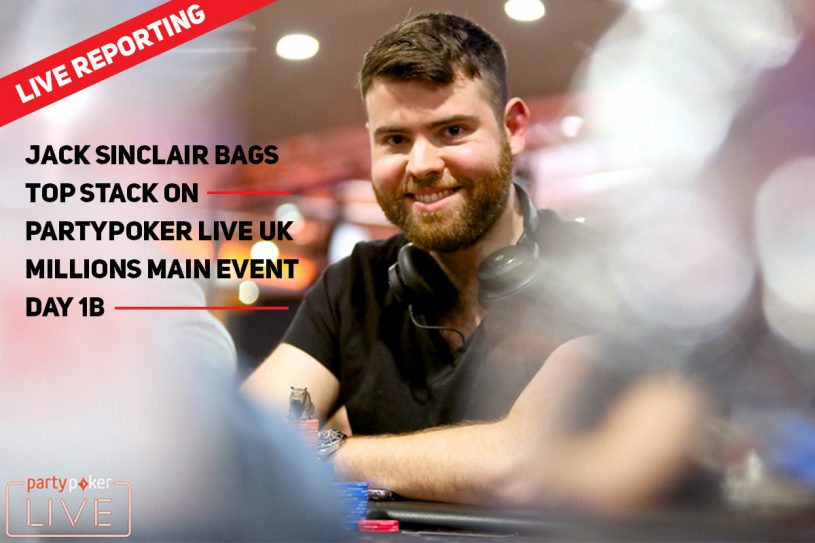 Day 1b of the partypoker MILLIONS UK Main Event started small but ended with a bang as former WSOP Main Event finalist Jack Sinclair bagged a big chip lead and the field saw stars such as Chris Moorman, Alex Foxen, Kahle Burns, and Ludovic Geilich clash on the felt. Get caught up on all the action right now in this recap.

With 184 players registered as the final starting day came to a close, the event is looking to meet its guarantee considering there are still dozens of players already qualified online that have already played their Day 1 and 2 on the virtual felt. With the option to (re)enter on Day 2, the $5,000,000 guarantee is sure to be met.

Players started with one million chips and blinds at 2,000/5,000, there was plenty of play early on. That, however, didn’t prevent players from splashing around in the first couple of levels. The first of those busting out was Christopher Kromidias, who thought he got lucky rivering two-pair and over shoved. Unfortunately for him, Jiayu Ruan had flopped top two and sat there waiting, making him the first with a scalp and the honor of being named early-day chip leader.

The $10,300 buy-in ensured the participation of the world’s top poker pros and that some would end up on the same table was a given. Still, Table 45 was on a whole different level with Alex Foxen, Roberto Romanello, Jack Sinclair, Chris Moorman, Dietrich Fast, Simon Deadman, Jeff Kimber, and Tamer Kamel rubbing shoulders. When Foxen and Kamel busted, their seats were filled with Igor Kurganov and Benjamin Pollak. Hardly an improvement for those looking for an easy day.

With so much raw poker talent concentrated on one table, there was always going to be fireworks. One such hand saw Alex Foxen bluff all the way for massive amounts of chips with nothing. Fast called him off with ace-queen high in what was one of the biggest pots of the day at the time.

One table over, another “made-for-tv” table formed with four WSOP Main Event final table players gathering. Ryan Riess, Chino Rheem, Vojtech Ruzicka, and Antoine Saout shared the felt with the latter two clashing in a big pot. Ruzicka got it in good with aces but fell to Saout’s queens when the French two-time WSOP final table player caught a flush on the river.

Rheem fell not much later trying to bluff raise Kamil Lewandowski on the river with his missed straight draw. Unfortunately for Rheem, his Polish opponent had flopped a set and rivered a full house and wasn’t willing to lay that down.

Another player that went out with a bang was Kahle Burns. Burns, who late last night had won the $25,500 Super High Roller, flopped a set only to see the river make for a straight on the board. Burns overbet for all but 5,000 of his chips but soon needed to commit that last chip as well, as his neighbor shoved. Burns called playing the board and headed to the exit as his opponent had pocket nines for the slightly better straight.

The last high-profile bust of the day belonged to UK’s top online player Chris Moorman. He triple barrel bluffed from first position against Morten Klein in the big blind. The latter wasn’t willing to relinquish his flopped second-pair with top kicker. Here are some assorted chip counts at the conclusion of Day 1b.for

Some of those that busted bought back in already, while others might opt to do so before the start of Day 2. From the 184 players that registered on Day 1b, just over a hundred survived. Those survivors return to Dusk Till Dawn in Nottingham for Day 2 tomorrow with play kicking off at noon. Late registration is open until the end of the first break. Day 2’s first level asks 15,000 and 30,000 from the blinds with the big blind also paying the 30,000 ante. Another eight levels are scheduled with a break every two levels, though that is subject to change. Live streaming of tomorrow’s action gets underway on PokerGO at 10:00 am ET. New to PokerGO? Subscribe right now to not miss a minute of the action.