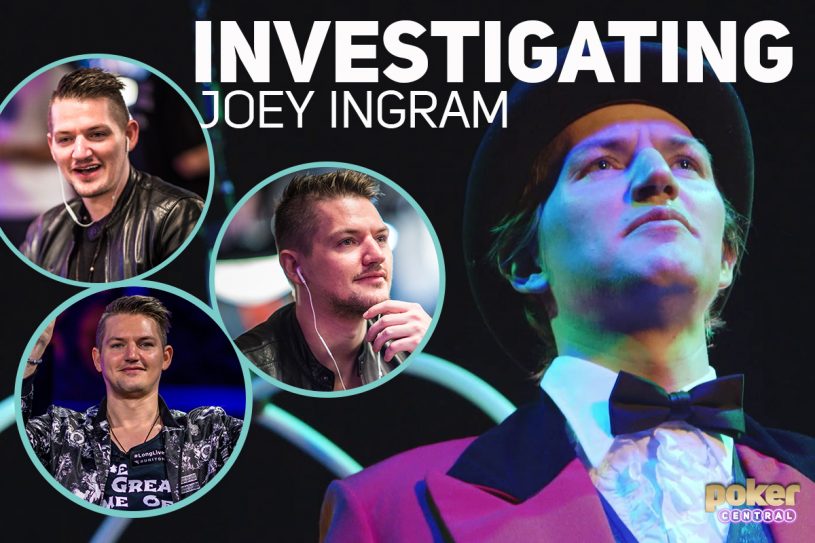 Who is Joey Ingram and where does his YouTube fame stem from? We investigated it for you!

The poker boom preceded the launch of YouTube in 2005 but ever since the video platform took a firm grip on the world, the game of poker has had a prominent place. But while the World Series of Poker, Late Night Poker, and other classic shows dominated the first few videos that surfaced on the multimedia channel, these days, poker videos are dominated and presented by poker players themselves.

It would be hard to argue against Joey Ingram being the current king of the format. A poker player first, and a good one at that, Ingram has grown into a big personality all while continuing to crash his favorite Pot Limit Omaha games whenever he’s presented with a good game.

Joey Ingram and poker go together like the c-bet and the fold, like Mike Matusow and the mute button. Whether you watch the Joey Ingram podcast or simply know ‘Chicago Joey’ as the man behind the recent investigative poker videos targeting evidence in the Mike Postle scandal, it’s certain that you know who Joe Ingram is and his contribution to poker.

The Origin of Chicago Joey

It’s incredible to note that Ingram has been making YouTube videos for 10 years now. Back then, of course, the United States of America was still a country where anyone in any state could download a poker client and load up dozens of poker tables. In fact, that’s exactly what Joey Ingram did, as his first video shows. Ingram, as ever, went big. He declared himself to be going for a record, the most hands played on PokerStars in 24 hours.

The Growth of Joey Ingram

Slowly but surely, Ingram’s content has changed over the years. From teaser videos to long session, Ingram has largely refined his work to a target time of around 30 minutes. While this used to be limited to poker, Ingram branched out years ago, and turned his style to other sports, too.

One example of this is Ingram’s most successful video of all time. With over 110,000 subscribers, you might expect every one of them to tune into the latest videos. But this one goes further… way further. Not one million, not two million, but an unbelievable 20 million views have flowed into the Joey Ingram video about the fight that took place after Conor McGregor’s UFC 229 bout against Khabib Nurmagomedov.

With McGregor’s cornerman Dillon Danis either provoking or being attacked by Nurmagomedov’s cousin, all hell broke loose, with dozens of people around the Octagon and footage hard to pick through to see how it happened. Hard, that is, unless you’re Joey Ingram, who did a ‘deep dive’ and got to the bottom of the mystery.

Mike Postle’s alleged misdemeanors at the Stones Gambling Hall took the poker world by storm in 2019, and right at the front of the investigation was Joey Ingram, a.k.a. ‘Papi’ as Remko Rinkema and Brent Hanks discussed in the Poker Central Podcast.

Ingram’s investigations into Postle’s alleged cheating not only raised the profile of the case to viral levels but genuinely brought the poker industry a degree of credibility in terms of looking at itself and calling out a potentially dishonest player. Here’s one example of how in-depth Ingram went in looking into the case.

You can tune into The Big Blind quarter-final that features Joey Ingram right here by subscribing to PokerGO, like Joey Ingram, you’ll never miss a thing.