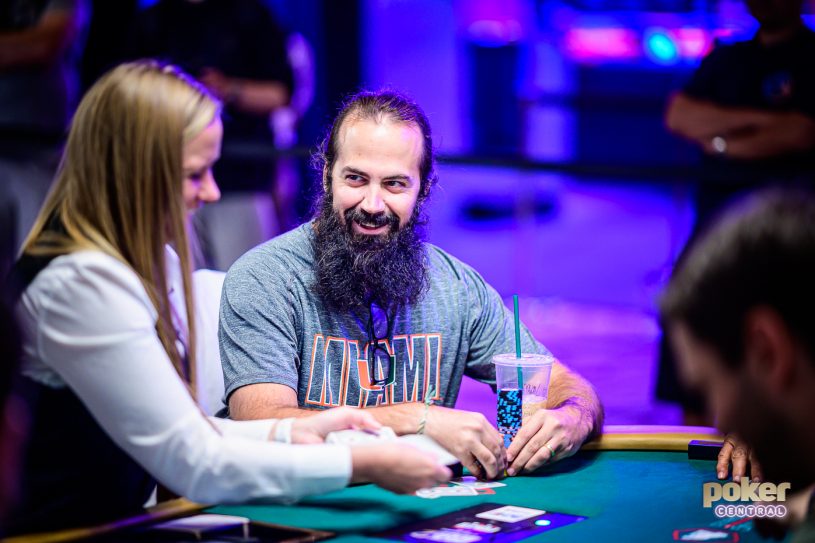 The World Series of Poker is not quite the same without Jason Mercier’s contagious laugh roaring through the Amazon room or seeing him sprinting over from Brasilia because his event just went on break and he’s being blinded off in another.

For more than a decade, Mercier was one of the staple faces at the WSOP, racking up a whopping 72 cashes, five bracelets and millions of dollars in earnings, but this year he kept fans waiting for 58 events as he just sat down in his first tournament of the summer, the $50,000 Poker Players Championship.

Learn more about Jason Mercier’s life story by watching his Pokerography on PokerGO.

Sporting a Cast Away-esque type look, Mercier took his usual big strides down the middle aisle of the Amazon room, iced coffee in hand, on his way to play off the rust against some of the toughest competition in the world.

“I’ve maybe played two hours of live poker in the last four months,” Mercier smiled as he was busy being a full-time dad and husband to his 20-month old son and pregnant wife Natasha.

“I would expect myself to be a bit rusty but usually it doesn’t take me that long to get back into the swing of things.”

Missing Most of the World Series of Poker

After 11 intense full-time years at the World Series of Poker, it was an odd sensation for the top competitor to miss out on dozens of events but the freedom to spend time with his family was a great reward for all those countless hours he spent on the felt to afford himself that freedom.

“It’s nice to be a full-time dad and not really having to grind now is why I always grinded so hard in the past, to afford that freedom.”

Mercier hinted at the option of relocating to Las Vegas permanently as the offerings that pique his interest in the Miami/Ft. Lauderdale area are few and far between. But at least for now, a real ‘farewell to poker’ is not in the cards.

“It was pretty tough not being here and I’m dying to get in there right now,” Mercier said as cards went back in the air after the first break of the day.

“Following things from home makes me want to be there and there’s a reason that this is my first event of the summer. I didn’t want to miss this one, this is my favorite event of the year.”

Mercier’s best result in the $50,000 Poker Players Championship was a seventh-place finish in 2015 and he’s eager to get another crack at it.

“I’ve had a couple of good chances in this event before and eventually I would really like to win this one.”

The $50,000 Poker Players Championship streams live on PokerGO for two straight days on Thursday and Friday, when a winner is crowned. New to PokerGO? Subscribe right now to not miss a minute of the action.