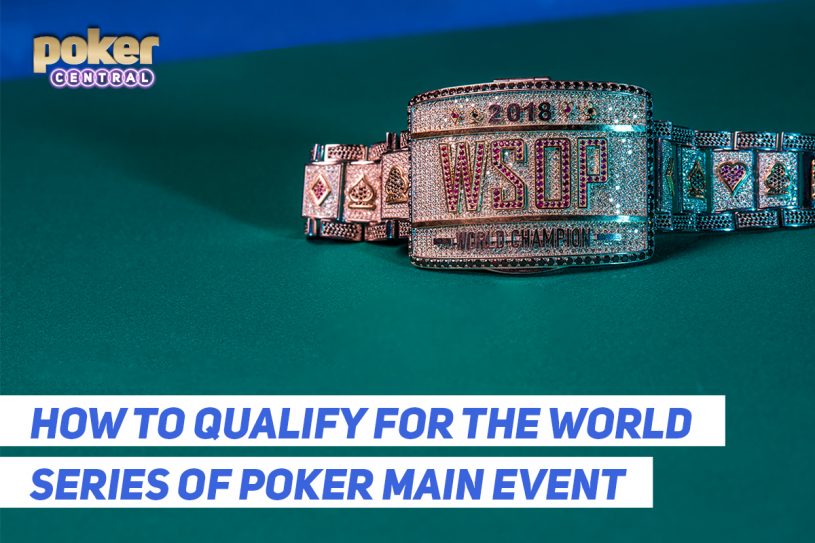 Here's everything you need to know about how to qualify for the World Series of Poker Main Event!

The World Series of Poker Main Event is the granddaddy of them all, but how do you qualify for this epic tournament? In this event, we break down how you can qualify for the World Series of Poker Main Event so use this as your reference as you aim to win your way to Las Vegas for a chance to win millions of dollars and follow in the footsteps of Chris Moneymaker, Jamie Gold, Martin Jacobson, and reigning champion Hossein Ensan.

The 2020 World Series of Poker is still many months away but online qualifiers are already running on WSOP.com which is available in select US states. So why not play your way to the 2020 WSOP poker action in Las Vegas at the Rio All-Suite Hotel & Casino by winning online satellite qualifiers?

Despite the second-highest WSOP Main Event field in poker history, the WSOP isn’t happy to stop there. With 2006’s record 8,773-player field the current record, the class of 2019 came so close to eclipsing that number with 8,569 players putting up the $10,000 buy-in by one method or another.

With four states now offering online poker as of Bonfire Night (New Jersey, Nevada, and Delaware being joined by Pennsylvania as of the 4th November), players will be able to access WSOP and look towards making the 2020 WSOP Main a record-smashing 9,000+ entries. Now that would be a fine way to celebrate the 51st annual WSOP.

With two states (New Jersey and Nevada) already offering $215-entry satellites with a minimum of one seat guaranteed to the 2020 WSOP Main Event, online qualifiers are well underway. Player demand may not be able to undo the effects of Black Friday instantly, but they can put pressure on providers to give them as many qualifiers as possible.

Main Event qualifiers started in October 2019 for participation next summer, meaning more players than before should be able to make it. However, with online poker not yet permitted across the whole of America, getting home-based players into the Las Vegas World Series of Poker (rather than the World Series of Poker Europe) has proved difficult since 2011, but there are still millions playing worldwide who aspire to be the next WSOP Main Event like Hossein Ensan was in 2018 or Doyle Brunson was in 1976 and 1977.

Last November, the $80 all-in satellites that the WSOP hoped would propel thousands of players to the WSOP began running, but they didn’t fill up like many hoped, and this year that needs to change for the numbers to go up. Chris Moneymaker famously qualified for the 2003 Main Event via an online satellite, but that was before Black Friday. Rest of the World players clearly have the jump on satelliting into the 202 WSOP Main Event as it stands purely due to access to online poker.

With mega-satellites kicking off in 2020 and a more genuine countdown starting to the return of the World Series, players will begin scheduling qualifying for the WSOP into their ‘must do’ list.

One aspect of qualifying for the WSOP Main Event that has changed over the years is the slide from huge packages that included hotel stays, air tickets and spending money to straight-up $10,000 entry prize for each winner.

That change is an important one. Not only does it reflect that many players who are taking on satellites are ones who will come to the WSOP regardless, but it also demonstrates that the extras that used to be tacked on to the $10,000 entry are no longer required. Do fewer players see it as a holiday or bucket list wish and more of a burning ambition to play in a WSOP event?

You can qualify now by heading to www.wsop.com and downloading the client, before taking on others in the race to the WSOP!

Whoever makes it to the 2020 World Series of Poker will be able to watch their progress on PokerGO by subscribing today and getting 24/7 access to the best poker content in the world. For example, you can learn all about Stu Ungar, Benny Binion and other Las Vegas legends in the new six-part Docuseries ‘Legends of the Game’, exclusively on PokerGO.