You are here
Home > Home > History of Poker 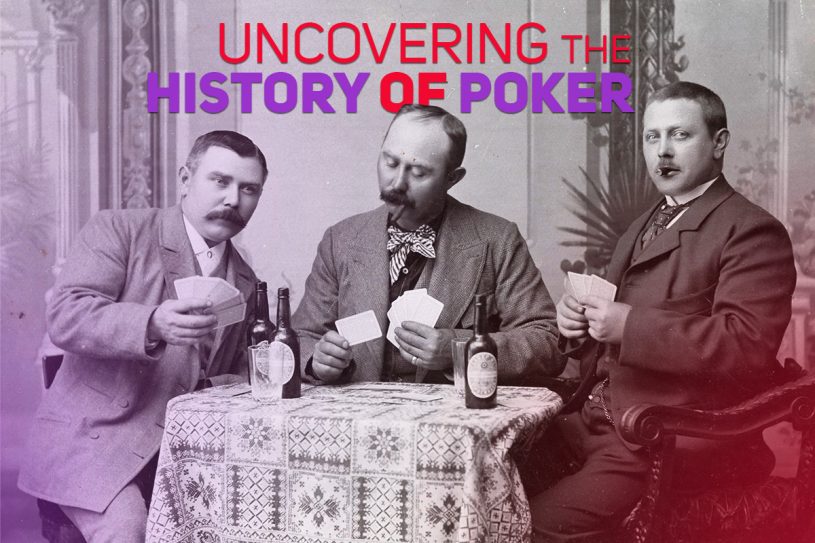 Legends of the Game uncovers the History of Poker on PokerGO.

The history of poker is one that has more twists than a bad beat story between friends. Looking for the origins of poker, the history of poker is rumored to have started in France, as well as on the Mississippi riverboats in the United States of America. But what is the truth? As it turns out, the Legends of the Game on PokerGO can teach us plenty about the game we all play today.

LUCKING OUT IN LOUISIANA

While it is impossible to pinpoint the exact time and location when someone first shuffled up to deal out some cards, what we can be almost certain of is that they only shuffled 20 cards. In the 1800’s, in the swamps of Louisiana, poker was invented – probably by trial and error – as it went back and forth on the riverboats that ferried goods across the great state of Mississippi.

Soon enough, gaming dens were a part of the local culture and a version of poker took off. The game wasn’t restricted to the rivers anymore, it became a part of people’s recreational lives. It’s believed that, just like jazz, the French brought poker to New Orleans, the five-card game of ‘Poque’ was brought to the United States. The German game of Pochen had a ‘vying’ section, and just like Brag, these developments to the art of playing cards saw poker, such as it is, originating in the very early 1800’s.

Dive deep into this part of poker history on “The Poker Trail” on “Legends of the Game” on PokerGO.

THE GOLD RUSH BRINGS THE GAMBLERS

If there was one type of person who, in the 19th century, would be guaranteed to travel, it was the soldier. As steamboats carried people to other ports, the concept of gambling and playing cards was one that caused a great deal of controversy. The rivers were safer than towns for anyone wishing to play cards for money, as in port, gamblers were seen as a threat and carried with them a degree of violence and anxiety. No-one could touch anyone of the riverboats if the captain gave his permission, and onboard, there were players with real money with cotton planters the earliest wealthy players, heading upstream after making their sale with full pockets.

Mark Twain writes of a steamboat poker game in The Professor’s Yarn where weapons were drawn. As cheating infiltrated the game, it even led to the game of poker being known as ‘The Cheater’s Game’. Alcohol, marking cards, dealing from the bottom, it was all going on two centuries ago. When it reached the Old West, poker was hugely popular and gave the game an image change. While the poker player of yesteryear was once known purely as a cheater, now the gambling man – and it was the men who played – was seen as a vaguely romantic rogue. The Californian Gold Rush saw the gambling dens give way to the game of poker being played in hotels and bars.

With even dignitaries playing the game, poker would reach the Royal Court in England, where Queen Elizabeth even dabbled. The reputation of the game grew and grew. General Grant even got involved in a game of cards, his desire to stop the soldiers gambling only outdone by his need to see what cards they had. Poker became a way of life in America and symbolized the ‘American Dream’ as the country moved from the Old West to the New Age.

With motorcars replacing journeys on horseback in the early 1900s, America was developing at a lightning rate. Poker lent itself to anyone who wanted to reinvent themselves. While poker continued to develop, that development wouldn’t take a huge step forward until some who had played back in the West brought the game to television as The World Series of Poker was born in 1970 and names like Doyle Brunson stepped from behind saloon doors into the spotlight. But that’s another story.

Want to watch all the Legends of the Game series? Sign up and subscribe today to PokerGO and you’ll have 24/7 access to the best content in the poker world. If our poker ancestors were here today, they’d be all over it like it was pocket aces pre-flop.