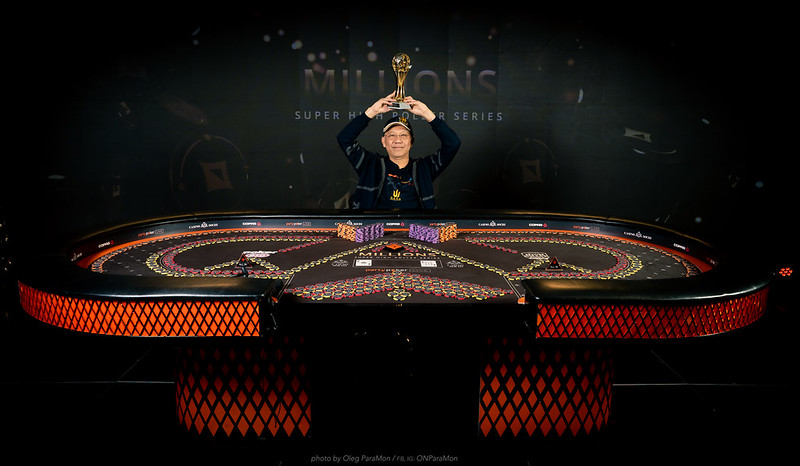 Paul Phua has already made three final tables at the partypoker LIVE MILLIONS Super High Roller Series this week in Sochi, but a title has proven elusive – until today.  Returning as the shortest-stacked player from nine finalists, he started the day with a double up and never looked back.  The Malaysian super high roller veteran, with over $16 million in cashes already, has boosted his live winnings by a huge $1,512,000 after taking down Event #6: $100,000 No Limit Hold’em.

The 42-entry event generated a total prize pool of $4,200,000, distributed between the top six finishers.  That meant that three of the nine returning to action today were to go home empty-handed after battling through an elite field to make Day 2.  Despite predictions of a slow start, there was anything but, with Cary Katz and Ben Heath falling in the first half hour.  Webster Lim was responsible for both of these eliminations and was to use his early boost to good effect, maintaining one of the top two stacks for much of the final table.

The bubble itself was a harsh one, Michael Soyza the last player to leave without a payday.  He looked in good shape to double, calling all-in from the small blind holding ace-king suited with a similar stack to that of preflop button jammer Matthias Eibinger (ace-deuce). A dramatic run-out saw Eibinger hit a runner-runner straight to eliminate Soyza and set himself up for what would end up being a million-dollar prize.

Phua then doubled through Kahle Burns in a pocket deuces vs. ace-king match-up that escalated with a flop featuring both a king and a deuce.  Burns never recovered from this hit, finishing in 6th for $252,000.   Eibinger then set about consolidating his chip lead, winning pot after small pot, putting his shorter stacked opponents to the test for all their chips repeatedly, without contest.  Lim, after his promising start, sat back for a while, until picking up pocket aces on the button when Michael Addamo had moved all-in on the cut-off.  Finishing off the start-of-day chip leader replenished Lim’s stack; Addamo took home $336,000 for his 5th place finish.

The next level belonged to Phua.  He busted Adrian Mateos in 4th place ($420,000), calling his blind-on-blind jam with king-seven offsuit and finding the Spanish all-time money list leader with four-five suited that found no help from the deck.  Phua moved on to bluffing the chip leader with the nut low, then doubling through him (all in preflop with ace-queen to Eibinger’s ace-jack).   With momentum behind him, Phua continued to chip up, making a big call to bust Lim in 3rd place ($672,000).  Lim had check-raised all in with a gutshot (and seven high) on the flop; Phua called with his own gutshot (and ace-high), which held to cement his lead heads up.

The accomplished Eibinger did not give up the trophy without a fight, however, contesting many small pots and narrowly missing out on a double that would have reversed their stacks.  All in with ace-nine to Phua’s ace-five, a chop ran out that kept Eibinger on the back foot.  In the end, it was a big call made by Eibinger saying, “I don’t believe you” that ended the tournament.  Phua had flopped two pair (aces and eights), Eibinger bottom pair (eights), neither hand improving down the streets – all of which Phua bet.  On each occasion, Eibinger made the call, including when Phua set him all in on the river.  The young Austrian picked up $1,008,000 for second place, a fair consolation for one incorrect read.

Phua, meanwhile, looked delighted to have finally picked up a title and MILLIONS LIVE trophy after a run of second-place finishes in some of the biggest buy-in tournaments in the world.

The penultimate event of the High Roller Series Sochi – $50,000 Short Deck – can be followed here, with its final table streaming on PokerGO tomorrow from 7am EDT/2pm local time.