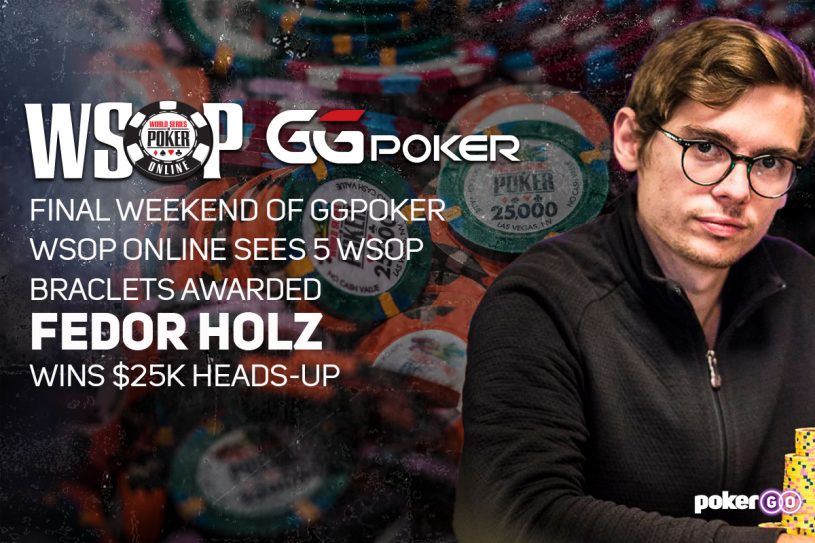 The 2020 World Series of Poker Online on GGPoker continued over the weekend with firstly the conclusion of the Event #77: $5,000 Main Event which was won by Bulgarian Stoyan Madanzhiev for over $3.9 million. Four other WSOP bracelets were awarded, while the final table was reached in Event #83: $10,000 WSOP Super MILLION$ where a $1.4 million first-place prize awaits the final winner of GGPoker’s WSOP Online.

The final four was reached in the Event #79: $25,00 Heads-Up No-Limit Hold’em [People’s Choice Event] on Tuesday as Sergi Reixach, Brunno Botteon, Oktay Kahyaoglu, and GGPoker ambassador Fedor Holz were all guaranteed $311,150 in prize money. Following Holz defeating Reixach, and Botteon and defeating Kahyaoglu, the final two players looked to face off for the $1,070,250 first-place prize, an added WSOP Europe package, and the WSOP bracelet

Holz immediately began the final match by taking a three-to-one chip advantage over a series of hands, and after a little back-and-forth between the two, the final hand would play out. Botteon raised with pocket tens and Holz defended his big blind with pocket fives and flopped second set. The two exchanged a series of raises back-and-forth before Botteon called all-in, and when no ten fell for the South African, he was eliminated in second-place, and Holz captured his second WSOP bracelet.

The Event #82: $1,050 Beat the Pros (Bounty) attracted a total of 2,024 entrants and created a prize pool of $2,024,000. The final table was a star-studded affair that included the likes of Elio Fox, Peter Chien, Mike Leah, Martin Zamani, and Dylan Linde. Linde managed to reach heads-up play, but he would be defeated by Melika Razavi who collected the $239,180 first-place prize and her first WSOP bracelet.

Razavi joins Amir Vahedi as the only WSOP bracelet winners from Iran, and Razavi becomes the fourth female to win a WSOP bracelet this year joining Naharin Tamero, Thi Truong, and Kristen Bicknell.

Kobbeltvedt has collected only two lifetime cashes, but he joins a list of Norway WSOP bracelet winners that include Thor Hansen, Sigurd Andreas Eskeland, Trygve Leite, and Annette Obrestad.

A field of 4,012-entrants would take a seat in the Event #85: $500 The Closer [Last Chance] to create a prize pool of 1,905,700. Reixach, Taylor Von Kriegenbergh, Paul Hockin, and Shankar Pillai were some of the players making deep runs, but it would be Belgium’s Michael Gathy winning his fourth WSOP bracelet and the $272,504 first-place prize.

The final event of the series was the Event #83: $10K WSOP Super MILLION$ that attracted an 899-entrant field and created a $8,720,300 prize pool that smashed the $5 million guarantee.

Play concluded with the final nine players all guaranteed $110,389 in prize money, while all eyes would be set on the $1,423,049 first-place prize. Suraj Mishra holds the chip lead ahead of Sylvain Loosli, while Chris Kruk, Connor Drinan, and Chris Oliver also have a seat among the final nine. The final table will resume on Tuesday at 2 p.m. ET.