You are here
Home > News > Five of a Kind: Living That High Stakes London Life 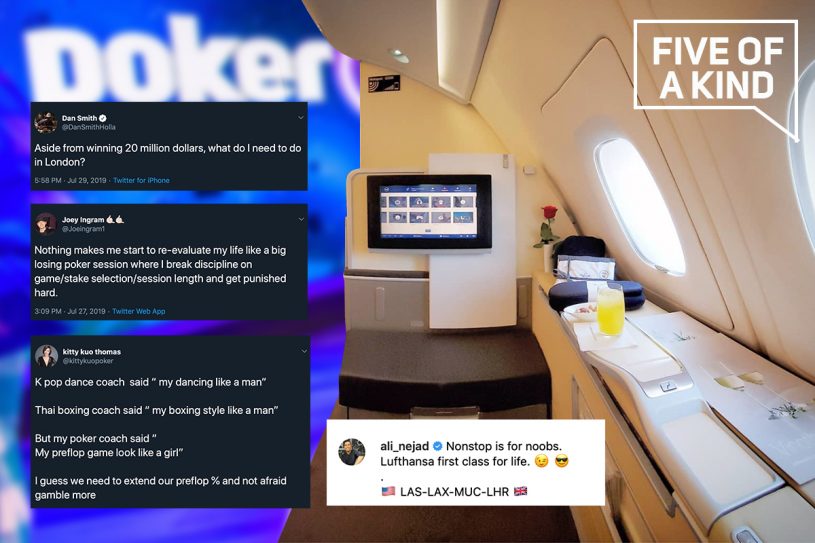 Despite the WSOP having wrapped up, the Twitter streets never slow down!

The World Series of Poker wrapping up might’ve created the slightest of breathers for poker fans and players all around the world but things clearly never truly die down in the Twitter streets. With the Triton Million kicking off on Thursday morning at 8:00 a.m. ET for free on PokerGO, it’s time to check-in with all that’s good on social media.

Dan Smith is a well-traveled man but he’s clearly always looking to make his trips as memorable as possible. If you’re looking for some good London travel advice, make sure to check out the replies to Dan’s Tweet!

Appreciate the recs. Now I have way more activities than I can possibly do in a week… I guess I’ll have to come back for British Poker Open next month !

Joey Ingram loves stirring stuff up on Twitter and he did so once again with some good ones this week! Firstly, Ingram once again had some compelling insights on what a losing session does to his morale. Secondary, he got a good laugh out of me with his impersonation of the Twitter trolls what will be bringing out the pitchforks during the Triton Million event.

Nothing makes me start to re-evaluate my life like a big losing poker session where I break discipline on game/stake selection/session length and get punished hard.

For the upcoming €1,000,000 buy-in @tritonpoker event I'm most looking forward to everyone on Twitter being overly critical of the businessmen play.

This is what I imagine they sound like when ranting about how bad everyone is & how they would crush everyone if they had €1mm pic.twitter.com/PUk6vqZbL7

Commentator extraordinaire, lover of all that’s high quality and swagged out, it’s no surprise that Ali Nejad was caught flying in the fanciest possible way to the Triton Million. Let’s see if all that rest and comfort will translate into an epic broadcast on PokerGO the coming days!

Nick Schulman is once again Ali Nejad’s partner in crime and he’s looking to relax and unwind before the action gets underway in London!

K pop dance coach said “ my dancing like a man”

Thai boxing coach said “ my boxing style like a man”

I guess we need to extend our preflop % and not afraid gamble more pic.twitter.com/io6AfMYrOP

And Nate sums most people’s summers at the poker table up in this very fitting GIF.

When you get aces in vs kings and then the river comes… pic.twitter.com/yF2j9Jzp6Q