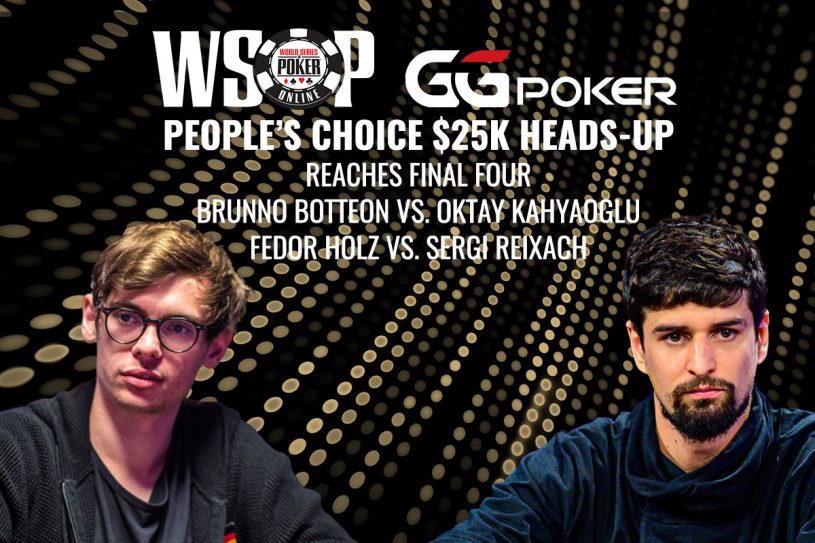 The 2020 World Series of Poker Online on GGPoker continued on Tuesday with the Event #79: $25,00 Heads-Up No-Limit Hold’em [People’s Choice Event] reaching the final four players. The 127-player field created a prize pool of $3,111,500, and when play concluded for the day, Sergi Reixach, Brunno Botteon, Oktay Kahyaoglu, and GGPoker ambassador Fedor Holz were all guaranteed $311,150 in prize money as all eyes were on the $1,070,250 first-place prize, an added WSOP Europe package, and the WSOP bracelet.

The most accomplished player remaining is Germany’s Holz who has amassed over $32.5 million in lifetime tournament winnings and will be squaring off with Spaniard Reixach who has collected over $5.6 million in winnings – with $3.4 million of those coming in 2019. On the other side of the bracket, Turkey’s Oktay Kahyaoglu will face Brazi’s Brunno Botteon who has collected ten cashes throughout the series including a sixth-place finish in the $25,000 POKER PLAYERS CHAMPIONSHIP last Saturday.

The final four players will return on Sunday, September 6, at 2 p.m. ET to play down until the champion is crowned