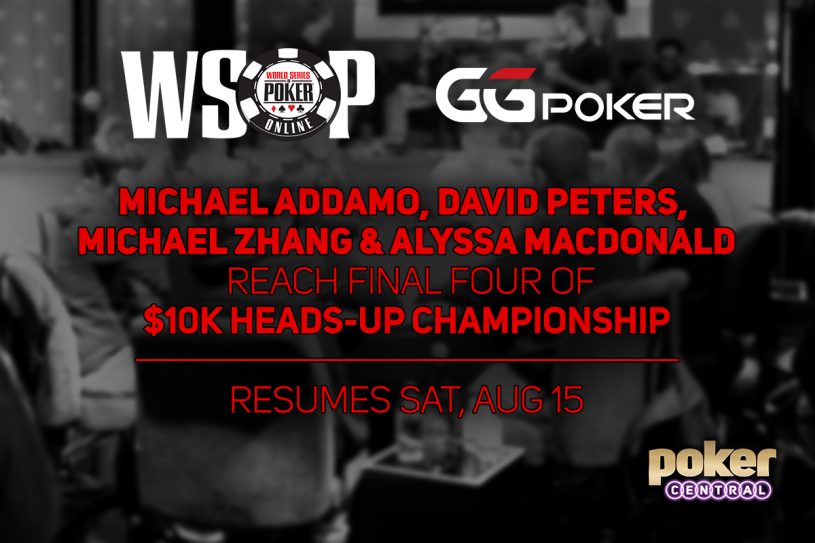 The 2020 World Series of Poker Online on GGPoker continued on Saturday with the Event #54: $10,00 Heads-Up No-Limit Hold’em Championship reaching the final four players. The capped 128-player field created a prize pool of $1,241,600, and when play concluded for the day, Michael Addamo, David Peters, Alyssa MacDonald, and Michael Zhang were all guaranteed $124,160 in prize money as all eyes were on the $360,480 first-place prize, added WSOP Europe package, and the WSOP bracelet.

In a field full of high roller regulars and savvy tournament pros, the likes of Addamo, Zhang, and Peters aren’t surprising. However, it is MacDonald’s name that may stand out. The Canadian online player has just over $6,000 in lifetime tournament earnings – but is now two heads-up matches away from winning a WSOP bracelet.

Nerves are finally starting to settle and heat is returning back to my body to be able to say we made it into the final 4 in the $10k HU WSOP on @GGPokerOfficial!!! I am still speechless…this has gotta be an insane dream i'll surely wake from soon… wow..just. wow.😭🤯😭 pic.twitter.com/OUpvFpS8su

The final four players will return on Saturday, August 15, at 2 p.m. ET to play down until the champion is crowned – and the conclusion of play will be streamed on Poker Central’s YouTube and Facebook channel from 2:30 p.m. ET.