You are here
Home > News > Femme Fatale II Comes to Poker After Dark with Andersen, Galfond and Ho! 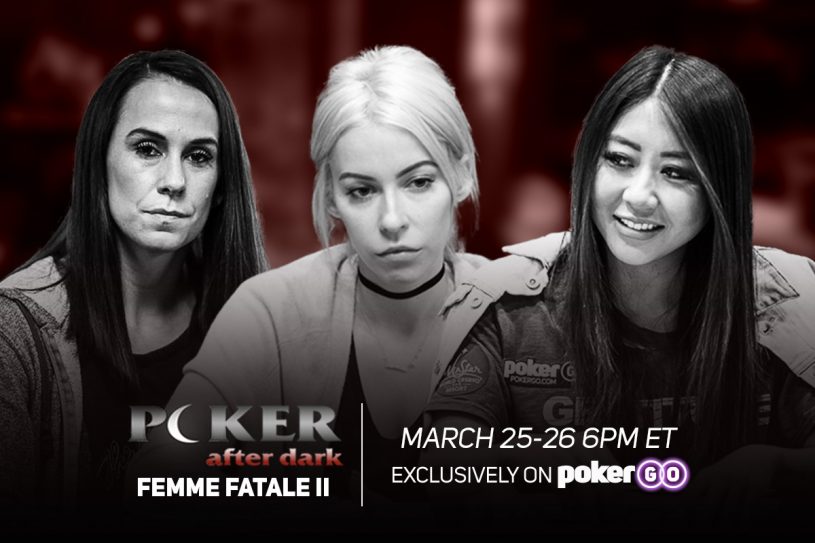 The women are back in action! Last night during the broadcast of the Super High Roller Cash Game, the second installment of “Femme Fatale” week on Poker After Dark was announced and seven women will battle inside the PokerGO Studio at $25/$50 stakes. The action kicks off at 6pm ET on Monday and Tuesday, March 25-26.

The women are back! #PokerAfterDark returns next week with “Femme Fatale II” on Monday and Tuesday starting at 6:00 PM ET. https://t.co/5rUlItuiNK pic.twitter.com/nUcaJVCOIs

The lineup for these two nights of Femme Fatale is stacked with a who’s who of poker. Farah Galfond, who just recently became a mother, makes her return to the PokerGO Studio after playing on “Games of our Lives” and “Rise and Grind” week late last year. Learn more about Farah in the episode of the Super High Roller Club that she was featured on.

Danielle Andersen has played on her share of Poker After Dark and Friday Night Poker sessions and you can learn more about her journey in poker by watching “How to Lose” and “Wild Cards” on Stories from the Felt on PokerGO.

Kitty Kuo is a PokerGO favorite, having appeared on the previous Femme Fatale week, Friday Night Poker and at the final table of the World Poker Tour Bobby Baldwin Classic where Darren Elias chased his fourth title. With Kuo in the lineup, excellent social media posts are to be expected!

Maria Ho, a regular not only on the felt but also tableside during the biggest tournaments inside the PokerGO Studio, will make another appearance on Poker After Dark after playing on “888poker” week, Holidays with Hellmuth and a variety of other shows. Learn more about Maria Ho’s life story on this special episode of Pokerography for free on YouTube.

Marle Cordeiro is making her Poker After Dark debut after a meteoric rise in the poker scene in the last few months. Cordeiro’s YouTube channel gained popularity while she’s been playing high stakes in Las Vegas and California. Cordeiro made a big impression with poker fans on Friday Night Poker, remember this one?

One of my favorite moments of poker ever. @fkassela is the GOAT, and this game was the most fun. https://t.co/TaYeT5iVMN

Lily Kiletto makes her Poker After Dark debut as well and she brings plenty of cash game and tournament experience with her. Kiletto has two World Poker Tour final tables under her belt, her best finish being a second place in the 2013 Lucky Hearts Poker Open for $191,880.

Last, but certainly not least, Denise Pratt also makes her Poker After Dark debut. Pratt made waves by roasting Dan Shak and getting noticed by poker fans all over the world. Shak took it all in stride and even took a picture with Pratt after this all went down. We’re in for a treat!

Can we PLEASE get this woman on @PokerGO to continue this story!