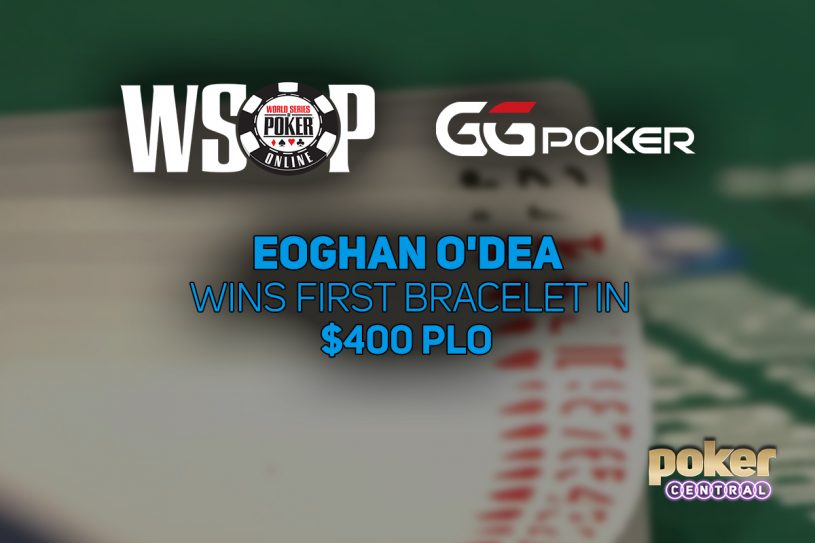 The 2020 World Series of Poker Online on GGPoker continued on Wednesday with Event #51: $400 Pot-Limit Omaha that attracted 2,005 entrants and created a prize pool of $753,880. Ireland’s Eoghan “DrRoche” O’Dea would follow in the footsteps of his father Donnacha and add a WSOP bracelet to the O’Dea collection after he bested Nital “4TheAnimals” Jethalal heads-up to win the $100,945 first-place, and an added WSOP Europe package.

A total of 278 players would finish in-the-money as the likes of GGPoker WSOP Online bracelet winners Lev Gottlieb and Roberto Romanello, along with Dan Smith and Danny Tang were a few of the players that exited shy of the final table. Lorenzo Bazei entered the final table as chip leader, but it would Jarred Solomon doing the heavy-hitting early when he eliminated both Daniel Juncadella and Lorenzo Bazei. Ruslan Nazarenko would fall in seventh when he ran his aces into the flopped trips of Jethalal.

Chi Chung Ho was all in with the best of it, but was outdrawn by O’Dea to exit in sixth, before Solomon was eliminated next when Jethalal turned a straight to outdraw the South African. Benjamin Voreland would call all-in on the rier holding two pair, but O’Dea tabled a full house to make it a three-handed battle. Robert Le Roux found himself all in against O’Dea, and when he could improve to two pair on the river, he was eliminated in third place.

O’Dea entered heads-up play holding a near two-to-one chip lead, and after a little back-and-forth, the final hand was dealt. In a raised pot, both players would throw bets and raises back and forth on the flop with Jethalal all-in holding two pair and a straight draw. O’Dea however had flopped top set, and when the board bricked out, Jethalal was eliminated in second place and O’Dea was crowned the Event #51 champion.

Prior to this win, O’Dea had amassed over $3.2 million in lifetime tournament earnings – mainly on the back of his sixth-place finish in the 2011 WSOP Main Event. O’Dea now joins Noel Furlong, Ciaran O’Leary, Marty Smyth, and his father Donnacha, as WSOP bracelet winners from Ireland.