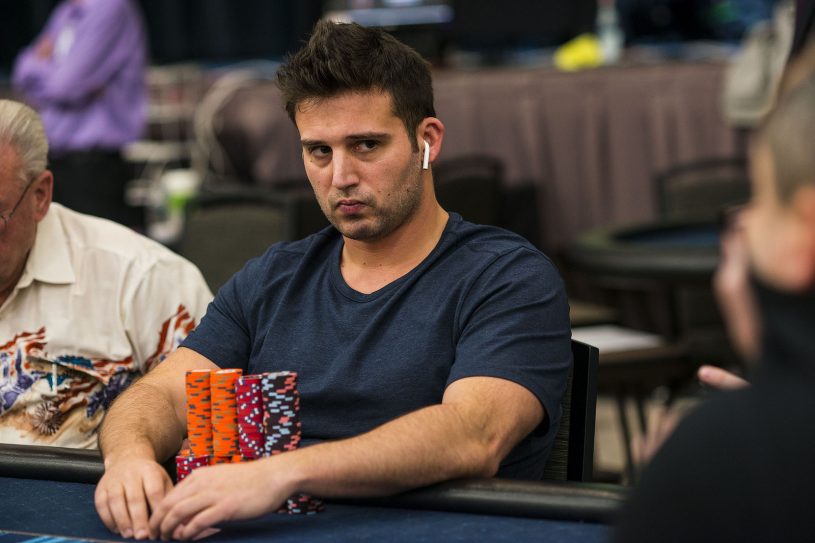 Darren Elias has four WPT wins and eyes a fifth at the LAPC. (Photo courtesy of the WPT)

When the LAPC final table recommences on Tuesday at the Hyper X Esports Arena, one man will be a clear favorite to get his name engraved on the trophy for a record-extending fifth time.

HISTORY IN THE MAKING

Darren Elias is already the record-holder in WPT Main Events, with four titles to his name, one more than Gus Hansen, Carlos Mortensen, Chino Rheem, and Anthony Zinno. But if he can see off five more players on Tuesday, Elias will go two ahead of those luminaries. He has a chip lead which equates to 41.5% of the chips in play.

“It felt good to take the lead. I was in a good position a couple of times during this event where I had a lot of chips and was able to pressure the table and win some big coin-flip scenarios pre-flop.”

Elias had trailed in the wake of David ‘ODB’ Baker for Day 3 and Day 4 but has taken the chip lead at the perfect time. With three very short-stacked players, he knows what he has to do to take advantage when play kicks off.

“The way the stacks are laid out, there’s more pressure on the players in second and third. They don’t want to finish fifth or sixth with their stacks.”

“The first one I won was Borgata. I think I felt a bit more pressure to win back then because I’d been to a few final tables and had yet to win. It was at my home casino, I had my family and then-fiancée-now-wife there and I felt much more pressure back then to win. I still feel the pressure, but it’s much less.”

Elias has taken the opportunity during the four-day hiatus between making the final and traveling to play it to head home and recharge his batteries. While not originally a fan of taking time off between tournament days, he can see the value.

“It is nice to have a couple of days to rest and recover. When you play a five or six-day tournaments you can get a bit worn down physically and mentally. I’m going to come in well rested,” says Elias. “I might look at some theory but I’m not going to research specifically on how my opponents play. I know if I can execute my best, that’ll put me in a good position.”

With such an overwhelming chip superiority, Elias could be forgiven for over-confidence. But the four-time champion is well aware that he is facing some very dangerous opponents.

“Every final table has its own dynamics and strong players to deal with. I haven’t always been in first place heading in, so I’m in a very good starting position helps but it won’t be easy.”

“I have played David a bit. His main focus is live mixed cash games, so I don’t see him a lot in no limit tournaments, but he’s a very experienced and very good live player.

Elias has even more history with Cimbolas, having played against him in the 2018 Tournament of Champions. It was an eventful meeting of minds.

“He finished second and I finished third. He’s a strong player and definitely of the European upbringing. He’s well studied and knows what he’s doing. He’s third in chips and that’s a tough opponent to play against.”

That particular Tournament of Champions didn’t go Elias way at all, after a huge hand with the eventual winner went against him.

“I don’t think I played my best final table, but I still had a good opportunity to win. I had queens versus jacks with three players left against Matt Waxman where I would have had 90% of the chips if I won. I didn’t win that hand and finished third.”

Elias always looks at situations for ways he could improve. He wasn’t completely happy with his play that day. He’s not had the same results in his career against European players, having won more in WPT events.

“My distribution of luck has been strange. I win the pre-flop confrontations in WPT all the time and in the WSOP and EPTs, I happen to lose them.”

Not that Elias minds at all, and with a huge amount of World Poker Tour events throughout the year.

“I do think I fare well against the fields in WPTs, I have a good understanding of American players and Canadian players. I think I have a better feel for them than some of the International players. But a lot of it is variance.”

BRINGING THE FAMILY TO VEGAS

Elias will fly out to Vegas with his wife, parents, and brother for the final. It could be a very happy family trip.

“It would be amazing to win out there with my parents, friends, and family there. I don’t want to say there’s an expectation to win, but everyone has high hopes for me. I always put myself under pressure to win, but it would mean a lot.

If Elias can seal a fifth WPT Main Event victory, then he’ll claim a top prize of a million dollars and a ticket for the $15,000 season-ending Baccarat Crystal WPT Tournament of Champions.

Darren Elias stands on the brink of history, with just five players standing in his way of what would be a phenomenal achievement.

If you want to watch the action live, then subscribe to PokerGO and you’ll see every bust-out, twist, turn and river along the way. Will the favorite take the WPT title or could an outsider prevent the seemingly unstoppable Darren Elias? The only way to find out live is on PokerGO!