You are here
Home > Home > Did Stu Ungar Cheat at the WSOP? 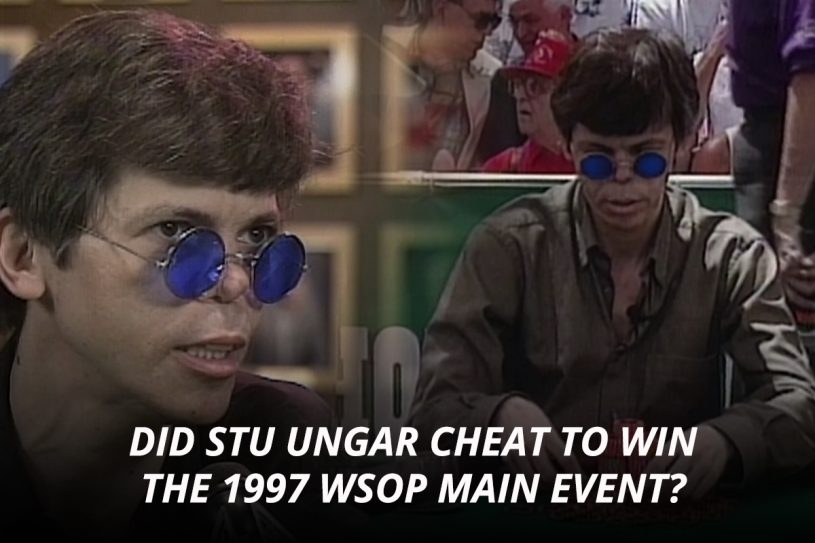 Did Stu Ungar cheat to win the 1997 World Series of Poker Main Event? We did some digging!

Mention the name Stuart Errol Ungar to any poker fan and their eyes might well mist over, cast into the memory of three World Series of Poker Main Event victories that will live on forever. Stu Ungar was a poker legend until his sad demise in 1998 and is fondly remembered today for his prodigious talent in both poker and gin rummy in which many poker players, such as Mike Sexton, have commented there has never been a better player.

Today, however, we put on our investigative – or “conspiracy” if you will – hat and we dive into a theory that Stu Ungar cheated at 1997 World Series of Poker when he won the ‘Al Fresco’ Main Event?

HOW THE ‘CHEAT’ CLAIMS AROSE

Ungar may have won back-to-back WSOP Main Events in 1980 and 1981, becoming a legend of the game, but by the time he won his third and – tragically – final Main Event in 1997, Ungar was a different man. Having looked like his nickname of ‘The Kid’ in his early days, by 1997, Stuey looked much older than his years after almost two decades of drug abuse had taken their toll on his body. ‘The Comeback Kid’ was on the trail of his third WSOP Main Event victory and would get it in spectacular fashion.

It was almost four years later that the rumors began. The story was that Ungar, or perhaps his mystery backers, had coerced with sections of the management in the event to ‘read’ marked cards via his cobalt blue sunglasses. Be prepared to hit a strange rabbit hole if you’re diving into this on Google.

Poker was different era 40-50 years ago @BuffaloHanks @RemkoRinkema @Trix2xploit Casino’s didn’t run poker rooms back then, they leased them out. So, I suppose anything was possible. I know that Stuey told his gin opponents that he would 100% catch them if they tried to cheat. https://t.co/yraZwag2as

HOW THE CON WOULD HAVE WORKED

According to the rumor mill, Ungar’s alleged ‘cheating’ took place when he used the special sunglasses to read the marked cards and could not wear the original contact lenses that had presumably been designed for the scheme because he had been physically affected by drugs.

Here’s the first problem with such an ‘out there’ theory. What level of drug abuse are we to understand caused problems with wearing contact lenses? If anything, they might be more comfortable than glasses to some addicts. They’re certainly less fiddly.

Another issue raised by the glasses that Ungar wore is that the small, circular lenses made it difficult for anyone behind him to see through them and identify certain cards.

Surely, this is one of the key points in picking apart the claim. It’s such a loose variable that Ungar’s supposed ruse would be exposed by someone walking behind him and identifying that some cards looked different to others. It’s looking flimsy.

It’s also alleged that directly after winning the 1997 WSOP Main Event, Stu Unger went straight to the Lady Luck casino and played blackjack with $200,000 of his winnings whilst wearing – of course – the same cobalt blue shades. Sunglasses, mind you, that Stuey was rarely seen wearing on any of the photos the exist of him playing poker.

So far, nothing is odd about this other than Stuey might have been expected to celebrate a little harder than a game of blackjack.

What adds the merest scintilla of credibility to the rumor is the point that the Lady Luck had allegedly already been turned over by hustlers wearing the ‘magic’ contact lenses.

On the night, it’s said in legend that Stu Ungar won another $200,000. This could be where the story of him cheating falls down around itself as baloney. Ungar wasn’t a winner in non-card games. It’s said that he was banned, but then, Ungar was barred from many casinos, and not all because of any illegality. Some casinos simply didn’t want the legend to fall apart. Casinos ban some players for their own good and it can hardly be argued that Ungar’s life, if it had carried on, would have been anything other than a dream come true for everyone in poker.

As one of poker’s greatest entertainers, Stu Ungar made his name by his card reading ability. While the conspiracy theorists will always allege illegalities and misdemeanors in those who are no longer around to defend themselves, the fact was that Ungar read his opponents, not the cards themselves. He could read men and women from their actions, their bet sizes, their patterns and he had a natural ability to do so.

No-one can take it away from him, even after his passing. Did Stu Ungar cheat at the World Series of Poker? Of course not. To some, however, a conspiracy theory will always make more sense than ever trying to understand how much of a genius he really was. Because that? It’s nearly impossible.

Catch up on a vast archive of World Series of Poker action, as well as the latest live streams and Friday night cash games by signing up to PokerGO today. Subscribe and you’ll have access to 24/7 poker content at the click of a button.