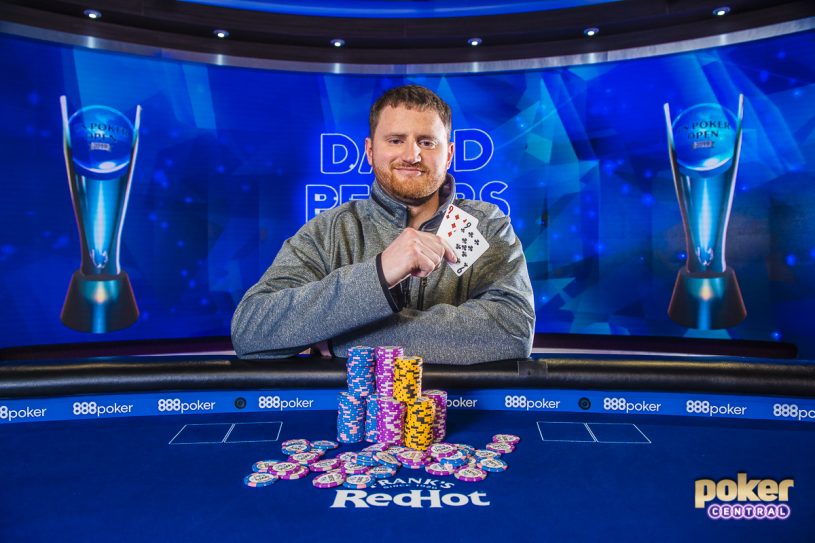 Relive the final table of the $100,000 U.S. Poker Open Main Event and all other events on PokerGO right now by clicking this link.

“This feels amazing,” Peters said after it was all said and done, “This is obviously a very prestigious tournament, a great series, and to come from behind and to pass Sean by 10 points at the very end, that’s a pretty-pretty crazy feeling.”

The 31-year old Peters has quietly amassed results all around the world on his way to building one of the most impressive poker resumes. Peters’ lifetime tournament earnings now sit at $31.9 million, placing him fifth-place on the All-Time Money List and just $600,000 shy of eclipsing Germany’s Fedor Holz.

About his work ethic, drive and relentless pursuit of greatness, Peters said, “I’m just always trying to get better. I put in an endless amount of hours away from the table and it feels great to see all the hard work pay off.”

Peters not only has a 2016 GPI Player of the Year award to his name, but owns a win on nearly every major poker tour from a WSOP bracelet and WSOP-Circuit ring, to an EPT and ACOP title, a Heartland Poker Tour victory, a Triton Super High Roller title, and now he has both a Poker Masters and U.S. Poker Open victory.

“This is my favorite trophy and one of my favorite all-time wins for sure,” Peters said about taking down the U.S. Poker Open Championship.

With a structure slightly slower and deeper then the previous nine events on the schedule, a total of 14 players would find themselves on the rail before the day concluded. Current series champions such as Imsirovic, Kenney, and Koray Aldemir all saw their chances of capturing the U.S. Poker Open Championship fall short while Super High Roller Bowl V Champion Isaac Haxton also found himself on the rail alongside reigning GPI Player of the Year Alex Foxen as just nine players bagged chips heading into the final day of play.

Returning on Saturday, the final nine players would all be looking to firstly reach the five in-the-money spots before making a run at collecting the U.S. Poker Open Main Event title.

Event #8 winner Schulman was unable to wield his short stack entering the day, and when he flopped a flush draw against the two pair of Chris Hunichen, he decided to go for it but failed to find the club he needed and was out in ninth-place. Sean Winter came into the day as the current leader in the U.S. Poker Open Championship and had to fade several scenarios involving Schulman and Peters to hold on to that title. Unfortunately for Winter, his sixth final table wouldn’t result in a cash as he was eliminated by Hunichen in eighth-place and would now be anti-sweating Peters as the only way he wouldn’t win the U.S. Poker Championship would be if Peters emerged victorious.

After having his aces cracked by a straight draw, Jason Koon would be left extremely short stacked. Playing in his first U.S. Poker Open of the series, Koon’s run ended in seventh-place when he decided to gamble on a straight draw against Peters’ top pair, and when it failed to come in on the river, the final table was now on the money bubble with just six players remaining.

Action circled between the final six players as several players took their turn at holding the chip lead. Unfortunately for the All Time Money List leader and 2018 Super High Roller Bowl Champion in Justin Bonomo, he would be heading home empty-handed when he open-shoved

and ran into Ryan Riess‘

. The board bricked out, and as Bonomo was eliminated in sixth-place, the final five players were now $264,000 richer.

In a similar fashion to how he played in Event #9, Ryan Riess played a patient and cautious game at the final table, and that fortunately saw him reach the money. For the 2013 World Champion, his run would end in fifth-place when he took his

. Tilston flopped a set, and although Riess turned a gutshot, when it didn’t arrive on the river, he would be pocketing $264,000 for his fifth-place finish. Martin Zamani was the relative unknown compared to the rest of his final table combatants, but with two cashes in the series so far off the back of a $25,000 High Roller win at the PokerStars Caribbean Adventure, Zamani was playing lights out. Unfortunately for the 23-year old, he took a stand holding

and ran into the

of Tilston. The board gave him a sweat on the turn with a straight draw to go along with his ace, but Zamani was eventually eliminated in third-place for $528,000.

Three-handed play saw the aggression slow down between each of the players, but inevitably it would be Tilston calling off his stack holding

of Peters. The board bricked out, and the defending U.S. Poker Open Main Event Champion collected $528,000 for his third-place finish.

Once heads-up play began, Peters would hold a near three-to-one chip lead over Hunichen. Hunichen immediately began closing the gap until the final hand went down that saw Hunichen limp-shove the button holding

as Peters snapped him off with

to give both players a sweat, but once that final card hit, Hunichen was eliminated in second-place taking home $858,000 after entering the day as the chip leader.

Heading into the final day of play, Peters had only one scenario for him to be crowned the U.S. Poker Open Champion. He needed to win. Sean Winter needed to not cash. Nick Schulman had to finish no better then fourth-place.

After an intense final table that lasted over six hours, Peters ticked all those boxes and was crowned the U.S. Poker Open Champion. Following in the footsteps of Stephen Chidwick in 2018 who won two events from five final tables, Peters collecting one win from three final tables and managed to leap over Sean Winter and Stephen Chidwick by just 10 points. Not only will Peters get to take home the epic U.S. Poker Open Championship trophy, but he will also receive a bonus $100,000 in prize money.

Stay tuned right here to PokerCentral.com for the exclusive live coverage of the upcoming Poker Masters action from the PokerGO studio. New to PokerGO? Subscribe right now to not miss a minute of the action.