You are here
Home > News > Daniel Negreanu Bittersweet After Losing Heads Up for 7th Bracelet: “The WSOP Will Only be a Success if I Win” 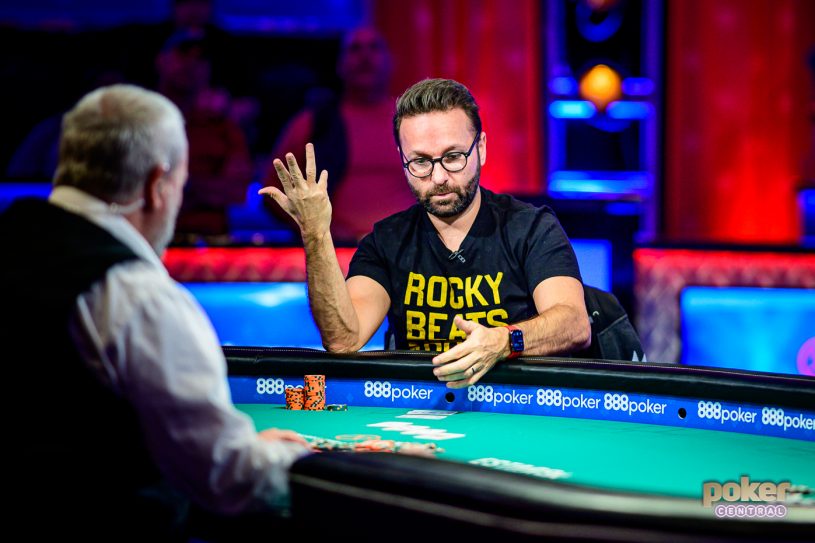 Frustrated with his run of cards during the heads-up match with John Hennigan, Daniel Negreanu throws up his arms.

“Jeez, it’s been that long?” Negreanu cried out when I pointed out that it had been 11 years since he’s had bracelet success in Las Vegas, just moments after he was eliminated by John Hennigan in second place in the $10,000 Seven Card Stud Championship.

Despite the letdown of another missed chance in a big moment, Negreanu remained relatively upbeat after falling just short of is seventh career World Series of Poker bracelet.

“It’s frustrating obviously,” Negreanu said. “John Hennigan is a great Stud player, he’s got many years of experience, but I thought I played pretty well. I did the best I could against a really good Stud player, and I think he’ll admit this too, but heads up you just have to make two pair more often than your opponent to win it.”

Negreanu emphasized that he was chalking Hennigan’s win up to luck, but how the variance in heads-up Stud can be quite deflating, a sentiment Hennigan shared in his winner’s interview.

“This was a very tough duel,” Hennigan said. “He played so well and I played so poorly. He really did not get what he deserved.”

On top of missing out on a bracelet, Negreanu also lost out on some very valuable World Series of Poker Player of the Year points.

“I’m playing to win and this has been the best tournament I’ve played all summer and I’m unfortunate to go up against a real tough cookie who ran good at the right times.”

As the conversation goes on, the disappointment seemingly grows on Negreanu’s face as it’s seemingly starting to settle in how close he got. Over the course of his career, Negreanu has won six bracelets, finished second nine times, third five times and fourth four times.

“Finishing second is always bittersweet. You’re happy with your run, you did really well, and got so close that you can taste it.”

Referring back to the early days of his career, Negreanu said he closed things out almost all the time when he was at the final table, but the last five years he’s not been able to get over that hump.

“The idiots will probably say that I should work on my heads-up game, but it’s just variance. I’m happy that I’m putting myself into situations to win.”

Now, the grind continues for Negreanu after collecting a $151,700 payday as he’s on his way to register the $25,000 Pot Limit Omaha High Roller event. The summer is far from over and Negreanu is seemingly hitting his stride!

“I’m just gonna keep on trucking. The WSOP is only a success when I win that bracelet.”