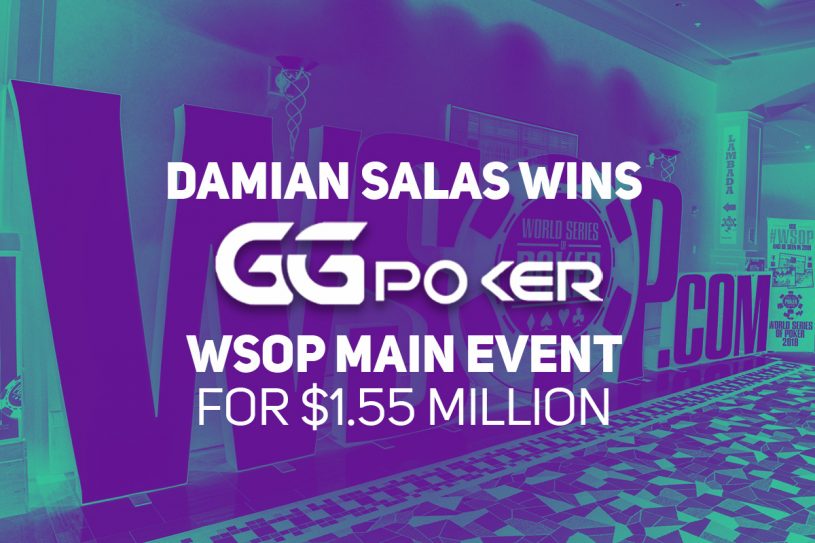 The international leg of the 2020 WSOP Main Event has concluded at King’s Casino in Rozvadov, Czech Republic, with Argentina’s Damian Salas topping the 674-entrant field to win the $1,550,969 first-place prize and earn his seat in the winner-take-all $1 million freeroll against the eventual domestic WSOP 2020 Main Event champion on Wednesday, December 30.

Beginning online on GGPoker, the three starting flights yielded 181 survivors that returned for Day 2 action as only 80 players would finish in-the-money. Josip Simunic would be the unfortunate bubble boy when his ace-king failed to improve against the pocket fives of Sergio Aido as the Spaniard improved to a flush by the river. Ronit Chamani, Ioannis Angelou-Konstas, Matas Cimbolas, Antoine Saout, Christopher Frank, Aido, Toby Joyce, Preben Stokkan, Carter Swidler, and Thomas Macdonald all fell short of the final table.

The final nine players were made up of players from nine different countries, and having nearly a week to travel to King’s Casino to play out the final table live, China’s Peiyuan Sun would opt out of traveling and be awarded ninth-place money of $75,360. Brazil’s Brunno Botteon held the chip lead ahead of Manuel Ruivo, while it would be Salas looking for retribution following his seventh-place finish in the 2017 WSOP Main Event where he collected $1,425,000 in prize money.

Hannes Speiser would be the first casualty when his queen-ten failed to spike against the pocket tens of Salas, before Stoyan Obreshkov fell next when his king-ten couldn’t improve against the ace-ten of Salas. Dominykas Mikolaitis shoved holding ace-jack, but when Ruivo looked him up with pocket threes and improved to a set on the flop, Mikolaitis was out in sixth-place as the final five headed on their first break with Botteon still in the lead.

Salas surged into the lead courtesy of a tangle with Botteon before Marco Streda exited in fifth-place when he ran ace-king into the pocket aces of Ruivo. Ramon Miquel Munoz shoved holding ace-six but was looked up by Botteon’s pocket threes. A three on the flop ended Munoz’s tournament in fourth-place before Ruivo exited next when his flopped two pair was outdrawn by Salas’ flush draw on the river.

Entering heads-up play with just under a two-to-one disadvantage, Botteon immediately began closing the gap before taking a narrow lead. Salas quickly shot back into the lead then pushed further ahead until the final hand when Botteon bluff-shoved the river with seven-high. Salas took his time before eventually calling with two pair to send Botteon to the rail in second-place as Salas was crowned the champion and awarded the $1,550,969 first-place prize.

Salas now moves to over $4.2 million in lifetime tournament earnings while also climbing to third on Argentina’s All-Time Money List. Salas will now have the opportunity to add another $1 million in prize money when he travels to Las Vegas, Nevada, for the December 30 winner-take-all freeroll against the eventual domestic WSOP 2020 Main Event champion.