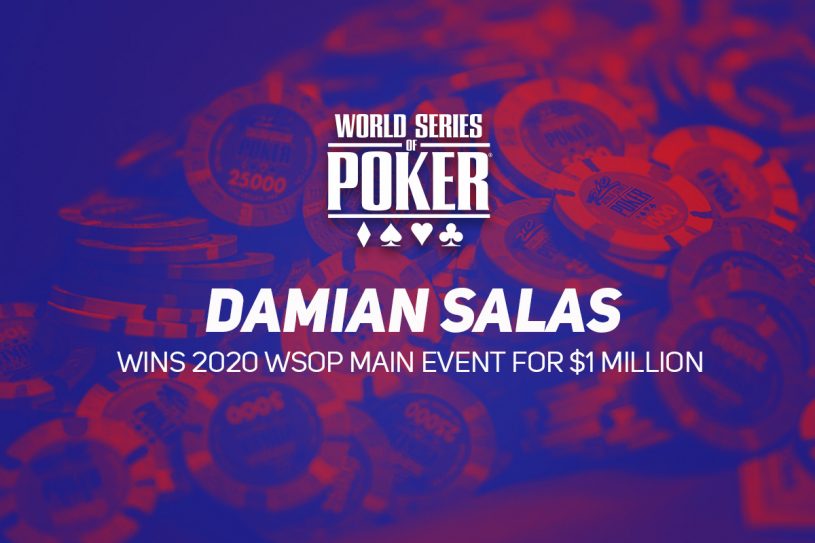 The 2020 WSOP Main Event has concluded with Argentina’s Damian Salas defeating America’s Joseph Hebert in the heads-up finale on Sunday night to win an additional $1 million in prize money and the coveted WSOP gold bracelet.

The poker world looked drastically different in 2020, and the WSOP adapted by running an online series on GGPoker and WSOP.com in the Summer, before adding two $10,000 buy-in Main Events to close out the year. This twist saw an international leg held on GGPoker, and a domestic leg held on WSOP.com with the winner of each facing off for a $1 million freeroll and the tile of the 2020 WSOP Main Event champion.

The international leg attracted 674 entrants with the final table playing out at the King’s Casino in Rozvadov, Czech Republic. The final table consisted of players from nine different countries as it would be Argentina finishing on top as Salas avenged his seventh-place finish in the 2017 WSOP Main Event with a victory and the $1,550,969 payday.

On WSOP.com a total of 705 entrants would partake in both Nevada and New Jersey with the final table playing out at the Rio All-Suite Hotel & Casino in Las Vegas, Nevada. Upeshka De Silva became an unfortunate COVID-19 casualty and was forced to take ninth-place money, and inevitably it would be chip leader Hebert finishing on top to collect the $1,553,256 first-place prize.

Although the heads-up finale between Salas and Hebert was set to occur two days following the domestic final table conclusion, Salas was delayed on entry into the United States, and the match was moved from Wednesday to Sunday.

On the line was the $1 million freeroll and title of 2020 WSOP Main Event champion, and the match began with Salas edging out to a small lead before a series of pots swung the advantage into Hebert’s favor. Salas would wrestle back the lead as both players headed on break, but when play resumed, Hebert would river a flush and surge back into the lead before ending his advantage out even further when he flopped trips.

Salas was chipped down to a stack of just ten big blinds before beginning his comeback. Salas doubled with ace-deuce against king-five, and then with pocket tens against king-nine. From there it would be a slow grind for Salas as he eventually fought his way back to even, and then out into the lead. It was then Hebert’s turn to double when he was all-in with a dominating king-queen against Salas’ king-jack as the board bricked out eight-high. Salas then doubled with ace-ten against ace-eight before the final hand occurred shortly after when Hebert moved all in with ace-queen and Salas called with king-jack.

A king on the flop and river ensured Hebert was eliminated in second-place, while Salas was crowned the 2020 WSOP Main Event champion. Salas has now amassed over $5.23 million in lifetime tournament earnings and sits second on Argentina’s All-Time Money List behind Ivan Luca.