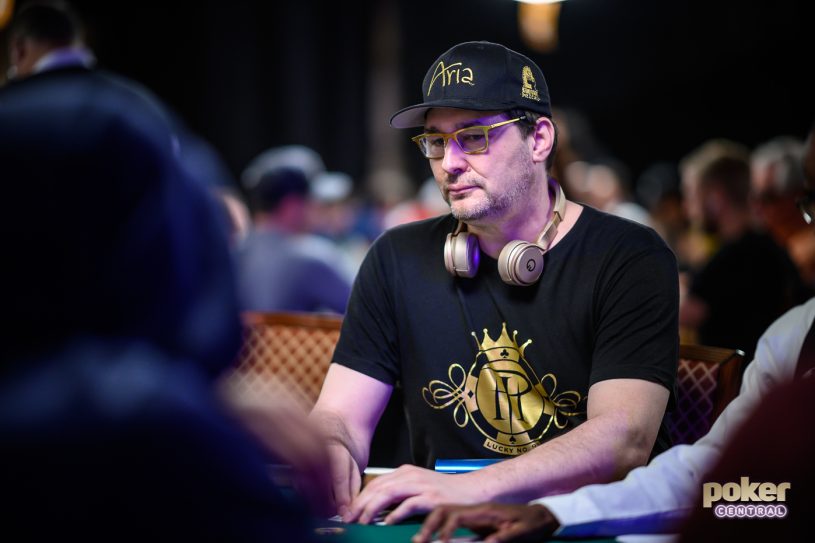 Phil Hellmuth at the WSOP 2019 felt

After almost three weeks at the felt, some poker players will start to lose a grip on reality. Not the many pros we feature here in our catch-up of what’s been said online about the World Series of Poker. From face-masking to Father’s Day, everyone’s got their feet on solid ground.

Asher Conniff has snapped this player at the felt, covered from the top of his/her head to the bottom of his/her chin in order not to give anything away, which directly flouts a pretty important WSOP rule. Will we see changes in the World Series as it progresses?

This shit should not be allowed pic.twitter.com/Lf2KsbGhWf

There have been some innovative ideas this World Series for WSOP events, but the addition of a certain party favorite at the rail? We are honking our metaphorical noses.

Hiring a clown to stand on the rail. Every time somebody busts, they’re given a balloon to hold for the walk of shame #WSOP

After some distinctly un-Kessler-like behaviour at the 2019 World Series, it would appear that normal service has been resumed…or rather, no service required.

I’m not saying @AllenKessler is cheap but he is drinking from a @Chik_Fil_A cup on a Sunday. 🤔 pic.twitter.com/ivydwmPZRl

HELLMUTH THANKS FATHER FOR HIS INFLUENCE

Record WSOP bracelet holder Phil Hellmuth paid tribute to his Dad on Father’s Day as Hellmuth Senior came out to join his son for brunch in Vegas.

Happy Fathers Day Dad! You’ve been an amazing father for 54 years, thank you. You taught me perfect morals and ethics, and instilled great values in me. You have lead by example. Blessed to have you and Mom here in Vegas w me now for Fathers Day brunch #POSITIVITY #PHNiceLife pic.twitter.com/kWknR8ZUAB

Steven van Zadelhoff had previously made a complaint about the WSOP antiquated clock system, but he didn’t mind a slow table in his latest event.

When you're too busy to complain on Twitter about the slow structure of a tournament, because you are actually playing poker 💪🤣🔥 #wsop #doublestack #thosekids #gimmegimme #million pic.twitter.com/2qS5xbavYN

Will Dan Zack ever be caught? His latest ranking points saw him crawl over the 2,000-point mark, as you can see in the up-to-date Top 10 below. The American has cashed in over a quarter of the tournaments he’s played, for a total of almost $200,000 in results and one, rather priceless WSOP bracelet.