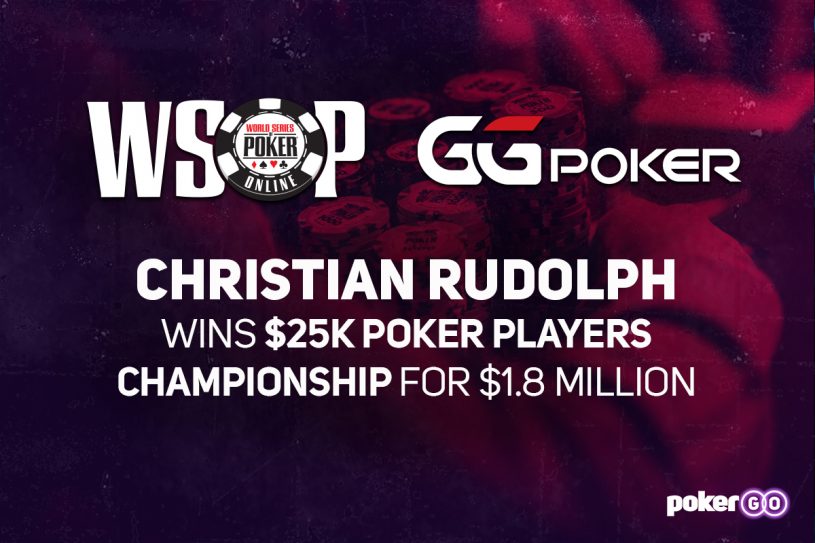 The 2020 World Series of Poker Online on GGPoker continued on Saturday with the conclusion of Event #70: $25,000 POKER PLAYERS CHAMPIONSHIP that was down to the final table of nine players from the 407-entrant field. Germany’s Christian Rudolph would defeat American Chris Hunichen heads-up to capture his first WSOP bracelet, an added WSOP Europe package, and the $1,800,290 first-place prize.

After taking nearly a week-long break, the final nine players were all guaranteed $154,416 in prize money, while all eyes were on the coveted WSOP bracelet and $1,812,290 in first-place prize money. Chip leader Jason Koon immediately began the final table by increasing his lead over Shankar Pillai who was the only WSOP bracelet winner at the final table. Pillai however, would pick up the first elimination when he sent Aliaksei Boika to the rail in ninth-place as his ace-jack held against Boika’s ace-five.

Hunichen would then score a double into the chip lead through Koon when his queens held against ace-jack. Paulius Plausinaitis was then eliminated in eighth place when he called all-in with king-nine from the big blind against Aram Zobian‘s shove with ten-eight from the small blind. Zobian flopped a pair, and the final table was down to the final seven players. Koon was the next to fall when he three-bet shoved all-in from the big blind with pocket tens but was outdrawn by Rudolph’s ace-queen.

Brunno Botteon would fall in sixth-place shortly after as his queens were outdrawn by Rudolph’s ace-eight when the German turned a straight and moved into the chip lead. Zobian then exited in fifth-place when his ace-queen failed to improve against the pocket nines of Rudolph as he headed into the first break holding a commanding chip lead.

Aleksejs Ponakovs found himself all-in with queen-six against Rudolph’s pocket fives and was unable to improve to fall in fourth-place. Pillai would be all-in holding ace-nine against Hunichen’s ace-king, and although he turned a straight draw, the river blanked and Pillai exited in third as Rudolph entered heads-up play holding a slight lead over Hunichen.

Rudolph rivered a straight to increase his lead to over a two-to-one advantage before winning several more consecutive pots to hold a greater than four-to-one advantage over Hunichen. Hunichen closed the gap slightly before Rudolph put his foot on the gas and motored his way to a nine-to-chip lead before the final hand. Hunichen shoved the button for five big blinds with king-queen and Rudolph called with queen-ten. The flop brought a ten, and when Hunichen bricked his gutshot and overcard to fall in second, Rudolph would be crowned the Event #70 champion.