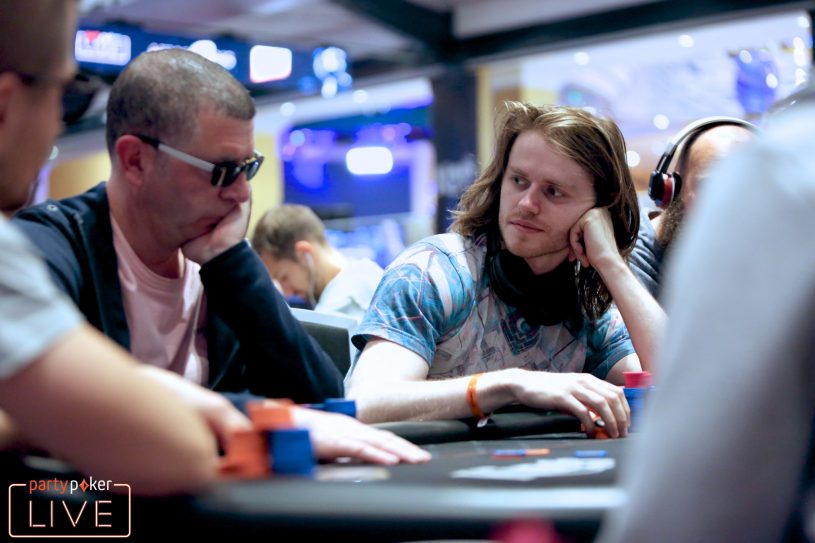 After eight more levels of play, the 72 players who started the day were reduced to a final table of just eight players hoping for a victory that will seal a million-dollar payday.

EARLY ELIMINATIONS IN ROZVADOV ON DAY 3

With a total of 402 entries made up from both live and online Day 1’s and Day 2s, just 72 players remained in with a shout of the title as play kicked off on the German/Czech Republic border. 102 of those players had never been inside King’s Casino prior to Day 3, and amongst that number was Aleks Dimitrov, who was at the top of the chipcounts, followed very closely by the leader from Day 2 inside the stunning cardroom, British pro Sam Grafton.

While only Grafton would remain in the hunt from those two chip leaders, others got almost no further than they started, with Usman Siddique, Patrick Mahoney, Dara O’Kearney and Bertrand ‘Elky’ Grospellier all among the early players to bust.

Charlie Carrel, who himself had been very short-stacked on Day 2 with just 90 minutes of play remaining, had doubled twice to put himself back in the hunt, and that resurgence was confirmed when he won the biggest pot of the tournament so far to win a massive pile of chips having hit middle set and got all of his opponent’s chips after they moved all-in with just top pair and a king kicker.

After another rollercoaster day of action for the popular and dangerous poker legend Roberto Romanello, the Welsh warrior will be sharpening his fish slice as he hopes to serve up yet another huge victory in his career come Sunday evening with 41,900,000 chips by the end of Day 3 gained through hard work and no little flair. The restauranteur and partypoker Team Pro will have plenty of chips to work with as he looks to capitalize on his record in final tables, which is very impressive. Once again, he put on a masterclass at the felt to remind viewers that he still has some serious moves at the poker table.

After the prizes were announced, and the players dropped one by one to get closer to the final table, stars such as Matas Cimbolas (12th) and Dzmitry Urbanovich (10th) just missed out on the final table. Although nine were reseated (and indeed redrawn), only eight of those players would be official final table players.

It would be the Hungarian player Jozsef Liszkovics who would be eliminated in ninth place, cashing for €80,000 but missing out on the final day’s play. He was all-in with an offsuit queen-jack and was in bad shape when Romain Lewis, the Frenchman who is based in London, called him with the ace-king of diamonds. The board brought no help for the shorter stack and the final table was set.

It is sure to be a fantastic day of action when the streaming continues on PokerGO, with three British players positioned for a final day shootout among top-quality opponents who will all have their eyes on the top prize of a million euros.