You are here
Home > News > How to Bust the Main Event, What Folks Back Home Ask & How Many Water Slides Does Ben ‘Sauce123’ Sulsky Have? 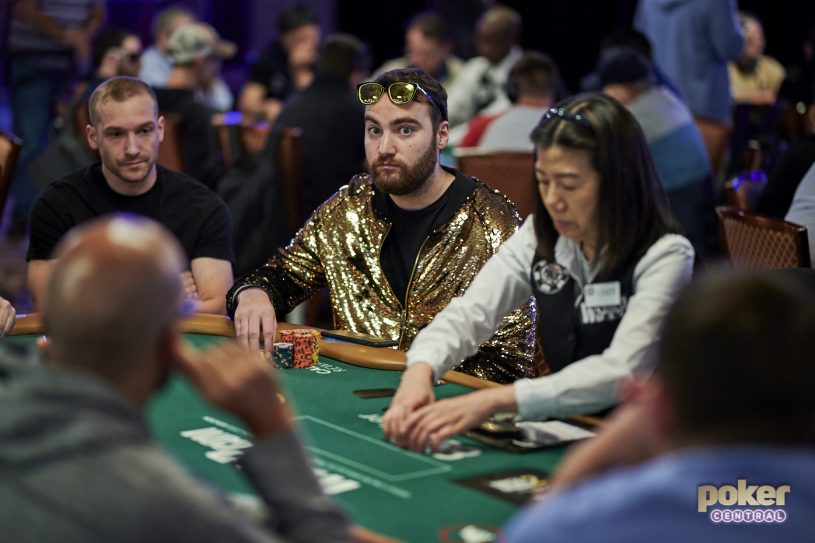 Busting the Main Event is a feeling like no other in poker. You’re going to have to wait another year to play in the greatest tournament in poker, you will have to watch as your vanquisher goes about attempting to win it instead of you with your chips, and, well, it hurts like a punch in the gut. It’s the dream dying.

ANDERSEN JUNIOR IS SPOT ON

There are good ways and bad ways of dealing with the pain of leaving the WSOP Main Event, but few better than this, from an 11-year-old. He’s going to be one to watch in 10 years time.

I mean…how next level is my kid’s main event bustout support? Literally the best. 😭😂 pic.twitter.com/3TUd0gNACA

If that wasn’t good enough, there’s a serious intelligence behind his support. Either that or he’s wicked smart about getting the pizza he wants.

Chad Power managed to get there with pocket queens against pocket kings on a spectacular day of drama. Gues what those folks back home are asking him?

Day 5 of the main event is about that time where your friends from home start asking you if you count cards and have a good poker face.

Dan ‘Jungleman’ Cates visited friend and online foe Ben ‘Sauce123’ Sulsky to check out his water slides. Yes, that’s plural. Three of them. We need to know – are they color-graded for danger?

Crushing souls in the Main Event isn’t enough for Sam Greenwood, he has to be a really nice guy too. He’s got it all..but could he be about to become the Main Event winner?

Cashed the main event with my brother, @BigSey93 said my dad was one of the nicest people he's ever met and got berated by the lady who called Dan Shak a "pussy loser" three fulfilling and unforgettable experiences in the WSOPME. Day 5 tomorrow.

Richard Seymour has so many fans inside poker and NFL that he could very well be fending off fan mail with more defensive dexterity that he had to use to win three Super Bowls.

The guys are locked into #WSOP50 Main Event and enjoying the run former @Patriots star @BigSey93 is making in Las Vegas… but will we ever see @richeisen enter?@WSOP @RealKidPoker @MagicAntonio @PokerGo pic.twitter.com/TUELJo4L1N

Ask Chris Moneymaker how his WSOP Main Event went? Go on, give him a poke.

My main event. Thanks for the awesome rail. Couldn’t be happier with result and the future pic.twitter.com/M3LoabTP4A

AUSMUS PROUD OF… NOTHING

To all those players who say it’s the Main Event or nothing this time of the World Series, Jeremy Ausmus says…actually, they’re right.

I made day 2 of a poker tournament no one cares about right now. My chipstack: inconsequential. Cards are back in the air at who gives a shit #WSOP50

ZACK ON THE ATTACK IN PLAYER OF THE YEAR RACE

Does Dan Zack want to win the WSOP Player of the Year? You bet he does….

Selling to tomorrow’s 100k NL. Can’t promise I’m +EV although if not I certainly hope it’s close. If you want to gamble or help me prevent two @shaundeeb posters on the wall lmk

….and here’s where he currently sits on the leaderboard. It’s Top 5 or nowhere, this close to the line.