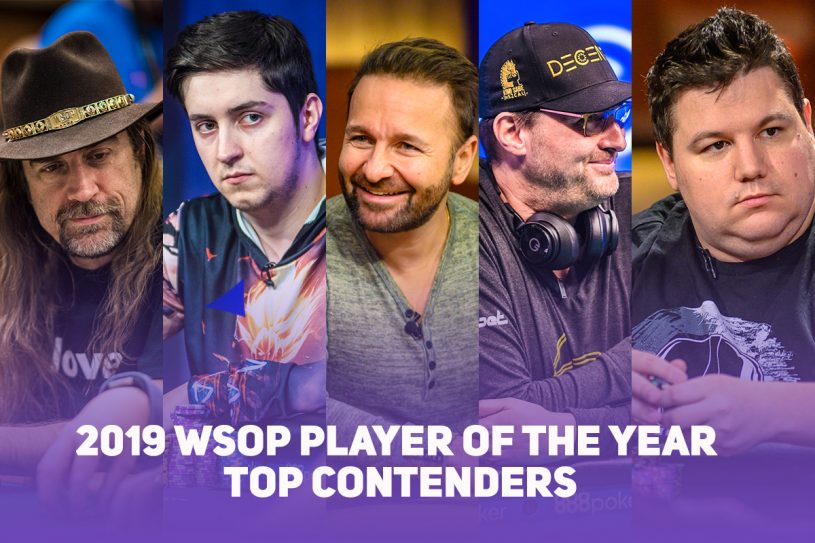 Here's a breakdown of the top contenders for the 2019 WSOP Player of the Year honors!

The greatest poker players in the world will gather in Las Vegas, Nevada in just four weeks time, and with our crystal ball at the ready, we’ve imagined who might be in the frame in mid-July for the coveted title of 2019 WSOP Player of the Year. The 2019 World Series of Poker Player of the Year race will conclude at the European stop in Rozvadov, as there are an additional 10 gold bracelets to be awarded in October.

Kid Poker has advertised his action in lower buy-in events to maximize his motivation for every single bracelet event. Negreanu is about to get married, he’s got a strong desire to become a father as well as winning a record-extending third WSOP Player of the Year title and we have to slot him on at No. 1 on this list!

The defending champion is the man to beat, and along with with being engaged in a bitter Twitter feud with Negreanu over the last few weeks, we expect this year’s Player of the Year race to be more heated than ever before! Deeb, who swept to the win last year, will likely go all out in an attempt to go back-to-back.

One of the most controversial figures since Black Friday turned the world of poker upside down, ‘Jesus’ won Player of the Year in 2017 and came close to the prize again twelve months ago, finishing in third place, albeit over 800 POTY points behind the winner. While he might never become a fan favorite ever again, his drive and determination at the WSOP are without question.

Another big contender and last year’s runner-up, Yu has it in his locker to pressurize anyone until the final hand of the final tournament. Yu plays all the games well and with the added spice of competing in the high roller No Limit Hold’em events, we can’t wait to see how he’ll fare.

One of the most consistent performers in the last 10 years, this WSOP crusher can fly under the radar to victory. Expect complete dedication from the Leafs nut who’s on Cloud 9 when it comes to his personal life with a baby on the way!

Held in the highest regard by his peers, Volpe finished fourth in the race last time out and will be doing everything he can to take the title this time around. ‘The Main Event’ has three WSOP bracelets and is always on the doorstep of winning multiple ones in one summer.

A former WPT POTY and an unlucky 13th-placed player last year in the WSOP race, Zinno has a potent mix of big game prowess and an indefatigable spirit. Often the last man sitting, could he be the only one left when the smoke clears?

A regular in the mixed games, Linde also has the charisma and professionalism that simply always put him the right mindset to succeed. He could go all the way to the top of this years POTY leaderboard. Listen to the Heads Up with Remko podcast featuring Dylan Linde right now.

The young Bosnian is living out his poker dreams in the brightest of spotlights. Imsirovic is on a heater, as he discussed recently with Remko and Brent on the Poker Central Podcast. It would almost be a surprise if Imsirovic didn’t walk away from the Rio with a bracelet. Imsirovic is a one-trick-pony though, focusing on No Limit Hold’em, but if we had to select one of the two-card crushers for this list, it has to be the reigning Poker Masters champion.

If anyone has the bit between their teeth, it’s always the Poker Brat. Can ‘Big Phil’ win bracelet number 16 this summer? The 50th-anniversary Main Event falls on the day he turns 55. There are just too many reasons to include Hellmuth on this list and back in 2012 he was just one elimination away from taking down the Player of the Year honors but Greg Merson proved to be unstoppable!

Others players to watch this summer!

Take your pick from the following names as they are sure to be in contention for the 2019 WSOP Player of the Year honors: Rob Mizrachi, John Hennigan, Joe Cada, Roland Israelashvili, Steven Wolansky, Allen Kessler, Randy Ohel, John Racener, Mike Matusow, Benny Glaser, and Adam Owen.