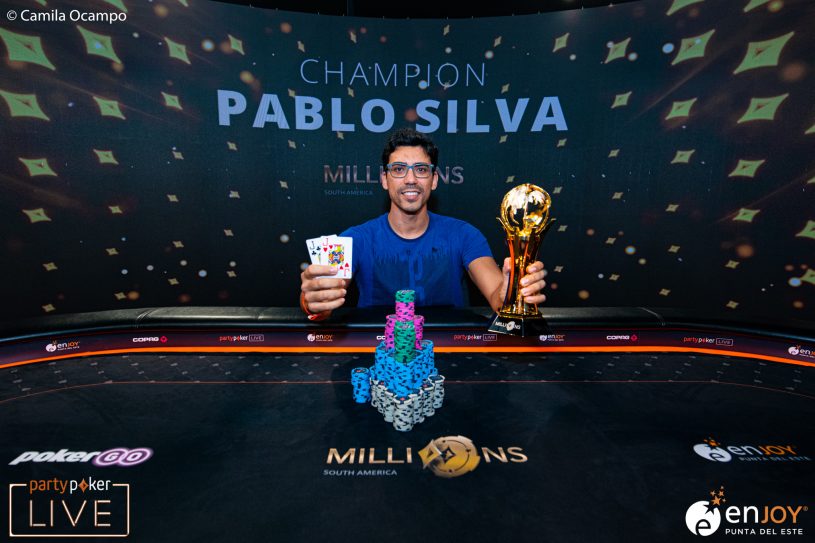 The final day of the partypoker MILLIONS South America started with nine remaining players all on the last table in play. For it to be called the final table, though, one person had to exit as official final tables are eight-handed. partypoker’s Dzmitry Urbanovich was the prime suspect for that role as he started the day with just four big blinds.

In reality, things would go a whole lot differently, as the Polish partypoker Team Pro doubled early and it was instead Rafael Caiaffa to go out first. The Brazilian pro shoved queen-ten into Fabian Gumz’s pocket nines and didn’t hit.

Having first doubled with jack-ten hitting a jack on the river against ace-ten, Urbanovich doubled again hitting an ace with ace-jack against jacks. When he made the nuts holding king-ten against ace-jack, Urbanovich was truly back in contention.

Pedro Medeira found himself short and made a move with king-jack. His neighbor Andres Viola looked him up with ace-queen and send the next Brazilian to the rail.

While everything had gone right for Dzmitry Urbanovich up until then, with some lucky escapes here and there, he would eventually go out in seventh place. He got it in with ace-king versus Daniel Rezaei’s pocket nines and the latter flopped quads to send the Polish partypoker pro packing.

Moments later, the biggest hand of the tournament played out between chipleader Rezaei and his neighbor Fabio Colonese. Rezaei had nines once again and once more connected on the flop as he hit a set. That same first three community cards gave Colonese a flush draw and he called all in as soon as Rezaei put him to the test. A spade on the turn gave Colonese the flush and with no board pair on the river, he found himself chipleader all of the sudden. Razaei, meanwhile, was down to five big blinds.

It wasn’t Rezaei out next, though. Instead, Sergio Luis Di Pego, who – besides getting a walk one-time – had not played a single hand, finished in sixth place for $160,000 losing pocket fours to Colonese’s queen eight.

Andres Viola, too, fell victim to Colonese. The latter got it in with a double gutshot on the turn to put Viola at risk and hit the much-needed ten on the river to make it five-handed.

Next to go was Fabian Gumz. He got it in against his roommate Daniel Razaei; the dreamed-about heads up match between the friends was not meant to be. Gumz got it in with ace-queen against ace-king and did not find a suckout.

Three-handed play was as swingy as they come with Rezaei and Silva exchanging the chiplead numerous times. Ultimately, a setup ended Daniel Rezaei‘s rollercoaster final table. After Silva opened, Rezaei looked down on pocket eights and pushed. Silva called with nines and won the hand without much of a sweat.

The heads up between the two Brazilians was a short affair. Silva had a dominating chiplead and got it in with jacks against Fabio Colonese’s eight-six. A jack-four-four flop ended it right then and there and Pablo Silva was crowned champion.

We congratulate Pablo Silva from Brazil with his win in the 456-strong partypoker MILLIONS South America Main Event 2020. Next up for partypoker’s flagship tournament series is MILLIONS Cyprus in May, followed by MILLIONS Vegas in the Aria Resort & Casino in June.