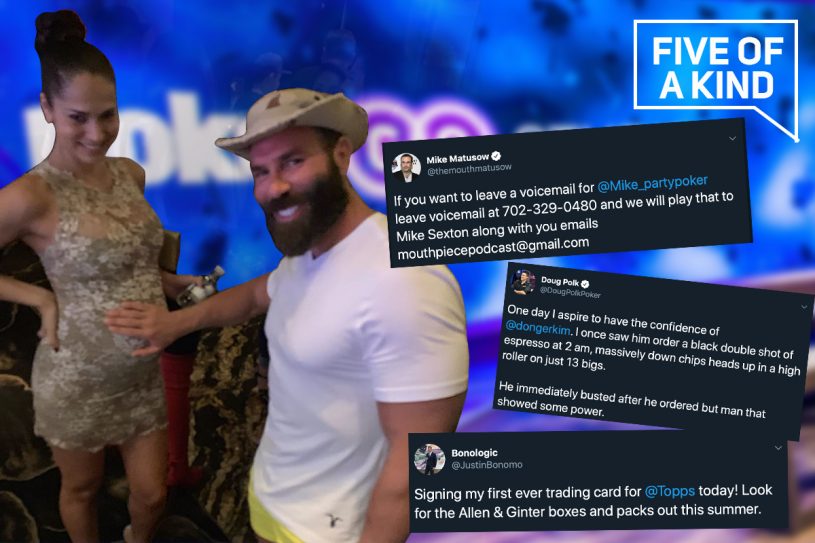 Dan Bilzerian and a baby? This and much more on Five of a Kind this week!

This week in Five of a Kind, your social media poker recap, we dive into Dan Bilzerian’s baby, Justin Bonomo’s trading cards, Doug Polk’s admiration for Donger Kim, Mike Matusow’s podcast, and David Williams’ daughter getting into Magic The Gathering.

Heads up No Limit Hold’em wizard Donger Kim has not been very active in the world of poker lately but Doug Polk just brought up a memory of the former grinder. Kim, who once outperformed his fellow humans against poker A.I Libratus, is clearly so confident in his abilities that he did this:

One day I aspire to have the confidence of @dongerkim. I once saw him order a black double shot of espresso at 2 am, massively down chips heads up in a high roller on just 13 bigs.

He immediately busted after he ordered but man that showed some power.

The Mouthpiece is Back!

Back in the day, Mike Matusow was one of the first to do a podcast-esque show called ‘The Mouthpiece” on Cardplayer, and he’s done a relaunch of sorts with a podcast he just started two weeks ago. Matusow is doing things in his usual Matusow way and you definitely have to go and check this out!

If you want to leave a voicemail for @Mike_partypoker leave voicemail at 702-329-0480 and we will play that to Mike Sexton along with you emails mouthpiecepodcast@gmail.com

Okay, not really. Dan Bilzerian is not entering fatherhood, but Jean-Robert Bellande is. JRB gave his old pal a backhanded compliment after Bilzerian “blessed” his twins this week, hoping his son picks up some of Bilzerian’s skills, while his daughter stays the f*** away!

@Danbilzerian blessing my babies. May Axel become the chick-magnet that he is and may Bella stay the 🤬 away from assholes like him. 😂😂 #thebellandetwins

We all know that some of the rarest trading cards in the world go for millions of dollars and while that’s not likely to ever happen for a poker player, it’s awesome to see them! While I’m unsure how to obtain the cards, Bonomo has provided the information in the Tweet below!

Signing my first ever trading card for @Topps today! Look for the Allen & Ginter boxes and packs out this summer. pic.twitter.com/09ZB2Z98D9

The 2004 WSOP Main Event runner-up David Wiliams is a huge fan and player of Magic The Gathering, and it’s great to see his daughter getting involved as well. It’s only going to be a few more years before we’ll see her in the Pro Tour, I’m sure of that!

On the way to school this morning Liliana said “I wish I could just stay home and play @wizards_magic with you all day”.

Mouth: School is very important, we can play after homework today.