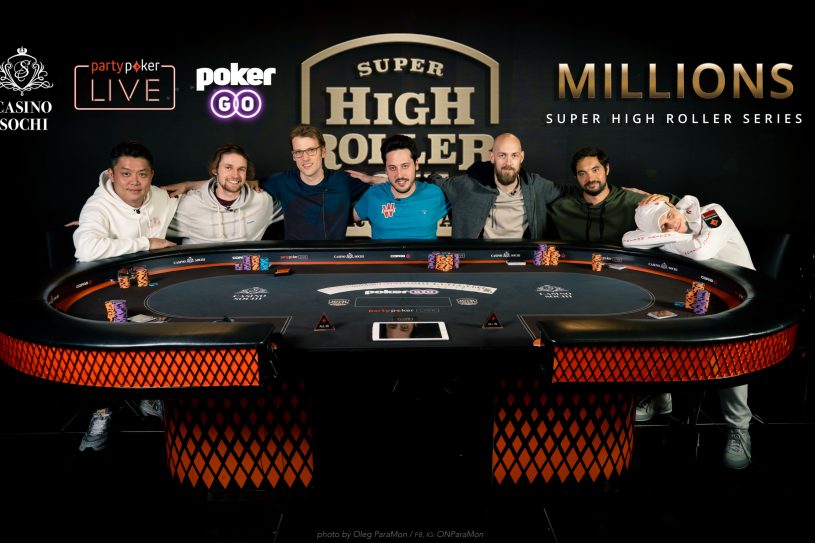 A cliff-hanger for the poker history books is in effect tonight after the Super High Roller Bowl Main Event has ended Day 2 with seven players remaining, one of whom will leave without a share in the $10,000,000 prize pool.  After a twelve-hour day at the tables, none of these players – all of whom have put on a show on the PokerGO live stream representative of the elite level at which they play – wants to be the one out on the bubble, having outlasted most of a 40-strong field.

Out in front lies the UK’s Ben Heath, who made accumulation and retention of a big stack look all but seamless in the early stages.  His compatriot Stephen Chidwick (6th worldwide in tournament winnings overall), at one point in contention for the chip lead himself, had a less fortunate end of day experience and brings up the rear of the chip counts with 14 big blinds.  The structure of this event is such that deep stacks have been the rule throughout, allowing for some  creative and thoughtful play.  Just one example was the start of day triple barrel bluffing with queen-high employed by Timothy Adams, who emptied the clip all in and at risk like this twice within the first level to build a stack that’s still with him now.

Recap all Live Reporting coverage from this event here and replay the Super High Roller Bowl stream on PokerGO here.

Adrian Mateos, the top of Spain’s all-time money list (just as partypoker Pro Mikita Badziakouski is of Belarus’s) had a late stage surge in chips and ends the day nearly neck and neck with Christoph Vogelsang, who is looking to win his second Super High Roller Bowl title.  Combined poker earnings on this final run to nine figures; expect the fight for the title to be one to remember.

The final table will be live streamed exclusively on PokerGO from the start (8am EDT/3pm local time) with key action recorded here on the Poker Central Live blog.