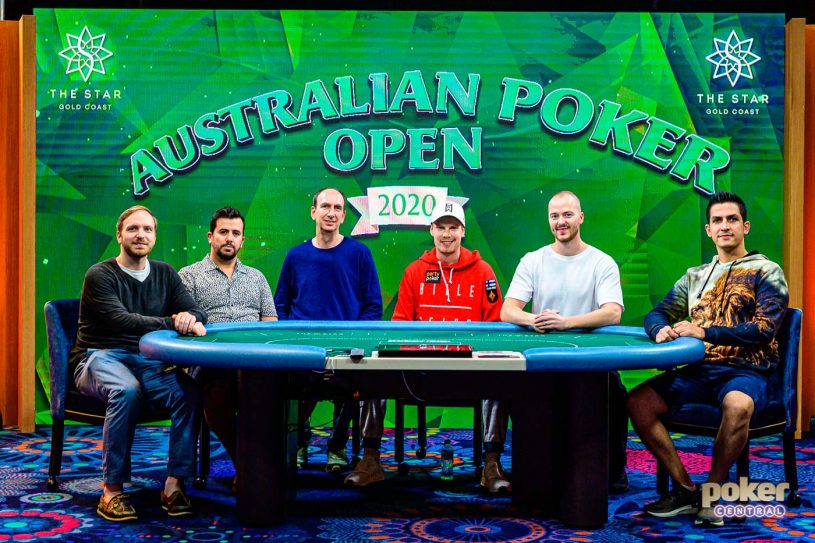 The second event of the 2020 Australian Poker Open was Event #2: $10,000 Pot-Limit Omaha held from inside The Star Gold Coast. After almost 17 full levels of play the field of 43 entrants was brought down to its final six. The final table of this event will stream live on PokerGO at 10pm ET on Sunday.

Breaking Down the Final Table Contestants

This AU$430,000 prize-pool event brought forward a mix of local players, and international high roller regulars looked to battle it out to claim the second Australian Poker Open title.

The money bubble was be reached in Level 16 when Jorryt van Hoof was eliminated by Sean Winter after his flopped set of queens was beaten by running straight cards. The remaining seven players would play just a handful of hands before Chino Rheem found himself all in against Andras Nemeth and running into an unfortunate river card to bust in seventh-place for AU$21,500.

The final six players are all guaranteed AU$25,800 in prize money, but all eyes are set on the first-place prize of AU$146,200 and the title of Event #2 champion. The player best positioned to make a run at the title is chip leader Najeem Ajez. Ajez was the beneficiary of a big pot against then chip-leader Sean Winter that propelled him to more than half the chips in play seven-handed. Ajez has almost 500,000 in career earnings.

A win in this event would surpass Ajez’s previous best cash, which occurred last week when he finished third in the AU$25,000 Pot-Limit Omaha at the Aussie Millions pocketing AU$136,840 for his efforts. A first-place finish would also see him rocket up almost 30 places on the Australia All-Time Money list to 85th place.

Sitting fourth overall is Sean Winter with 370,000 in chips. At the recent Poker Masters, Winter collected four cashes to see his lifetime tournament earnings currently sit at over $15 million. If Winter can take down Event #2, he will move to 42nd on the All-Time Money List.