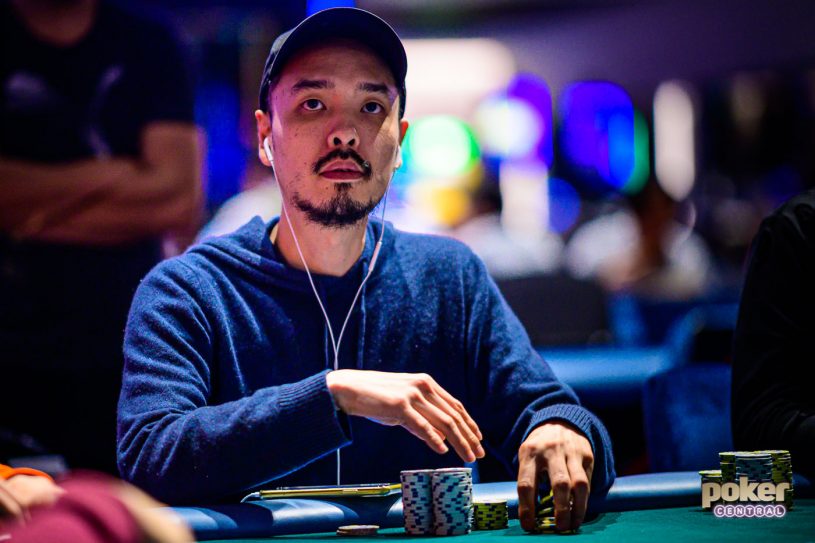 Chino Rheem leads the way at this $50k final . table.

The penultimate event of the 2020 Australian Poker Open was Event #6: AU$50,000 No-Limit Hold’em held from inside The Star Gold Coast. The longest Day 1 of the series so far saw play enter the 19th level, and once play concluded with just five players remaining, it would Chino Rheem holding the chip lead with 1,965,000 heading into Friday’s PokerGO streamed Event #6 final table.

The biggest buy-in of the series so far (with the AU$100,000 Main Event beginning on Friday) saw a total of 35 entrants create a prize pool of AU$1,750,000 that would pay the top five places. Once the final nine players redrew to one table, it would be Mikita Badziakouski eliminating the first two players when he eliminated Orpen Kisacikoglu in ninth place and Yang Wang in eighth place. Kristen Bicknell would fall in seventh place to leave the final six players on the money bubble.

Following two hours of bubble play, Matthias Eibinger would be eliminated on the money bubble when he called all in for a suited jack to be up against Luc Greenwood’s suited ace. The board blanked out eight-high, and Eibinger was eliminated in sixth place to leave the final five players with a guaranteed AU$140,000 in prize money. All eyes are set on the AU$700,000 first-place prize, along with the title of the Event #6 champion, and the player best positioned to make a run at the title is Chino Rheem who finished with the chip lead with nearly 2 million in chips.

Rheem won a pot on the bubble when he called a big river bet holding aces and was good against Mikita Badziakouski’s top pair to catapult into the chip lead. Rheem has over $11 million in lifetime tournament earnings which includes three WPT titles, a PCA title, and a WSOP November Nine appearance. Here at the Australian Poker Open, Rheem has collected two seventh-place finishes, and with a win in Event #6, can move into striking distance for the Australian Poker Open Championship.

Second overall is Australian Michael Addamo with 1,495,000 in chips. Addamo has amassed over $6.93 million in lifetime tournament earnings that sees him sit third on Australia’s All Time Money List behind Kahle Burns and Joe Hachem. In his hometown series of the Aussie Millions, Addamo won the AU$50k Challenge for AU$1,073,790 in prize money – his second biggest score behind his 2018 WSOP Europe €25,000 High Roller victory. In Event #5, Addamo finished in fourth-place for a AU$117,500 payday, and he’ll looking to better that in Event #6.

Canada’s Luc Greenwood sits third overall with 795,000 in chips. Greenwood sits with over $3.9 million in lifetime tournament earnings, and in Event #1 of the Australian Poker Open, he collected a ninth-place finish. With a win in Event #6, Greenwood can move into 21st place on Canada’s All Time Money List.

Fourth overall is Belarusian Mikita Badziakouski with 750,000 in chips. Badziakouski has amassed over $25.8 million in lifetime tournament earnings with the majority of those coming from 2016 onwards. Badziakouski made his Australian Poker Open debut in Event #5, and now he has locked up his first cash. Rounding out the final table is Andras Nemeth with 245,000 in chips. Following his win in Event #2, and two additional cashes, he is now back in the lead ahead of Stephen Chidwick in the Australian Poker Open Championship standings regardless of his result.