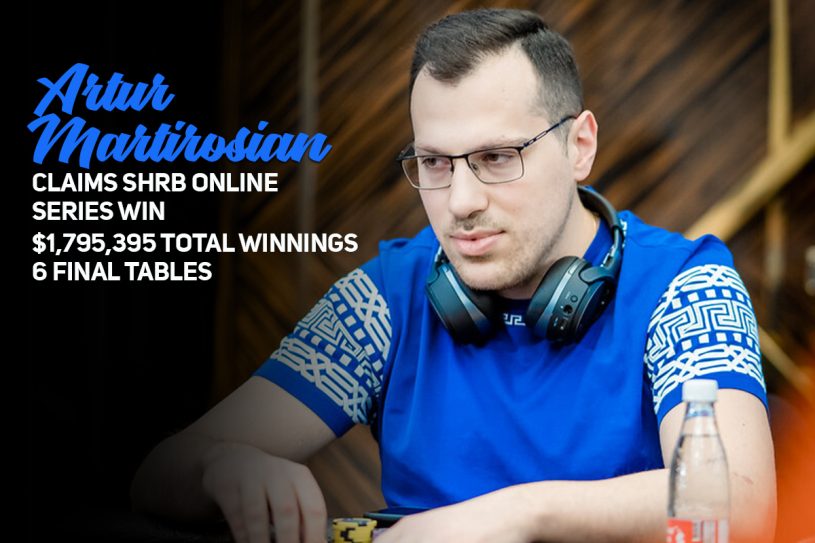 Putting in a stellar performance on the final day in the Super High Roller Bowl Online Series on partypoker, Russian pro Artur Martirosian has claimed the overall series victory! Making a total of six final tables across 27 events, Martirosian cashed for $1,795,395, narrowly edging out Viktor Blom who lead for nearly the entire series leading up to the final three events. The final standings are as follows.

On the final day of action, the three 2-day event final tables quickly finished and Artur Martirosian’s second-place finish in Event #23 to Stephen Chidwick gave him a shot at catching Viktor Blom. Blom still held a sizeable lead in the standings and well into the day both players were still alive in the final three events. Then, however, Blom busted two spots off the money in Event #25 and the tables started turning.

Martirosian finished 10th in Event #25 which meant that a Top 3 finish in either one of the final two events would secure his victory. The 23-year old Russian closed things out in style by finishing second and third in the final two events making him the biggest winner in the series as well as the overall champion. About his win, Martirosian told us the following.

“I am very happy, I spent a lot of effort, time, and emotions during this leaderboard race, but it all ended perfectly. Yes, I was not very lucky in the heads-ups stages, and every heads-up loss upset me, but everything was going great before that, so it would be ridiculous to complain. This is an excellent result, I plan to continue to play all these series and spend even more time working on a game outside the series”.

Here’s a head-to-head of Artur Martirosian versus Viktor Blom across the entire series.

Today, the $102,000 Super High Roller Bowl Online Main Event kicks off, a $3,000,000 guaranteed online freezeout that will be broadcast today and tomorrow on PokerGO’s Facebook Live page. The action gets underway on partypoker at 2:00 pm ET with eight 30-minute levels of late registration. Coverage goes live at 8:00 pm ET on Facebook for Day 1.

Here’s an overview of all winners of the first-ever Super High Roller Bowl Online Series on partypoker.