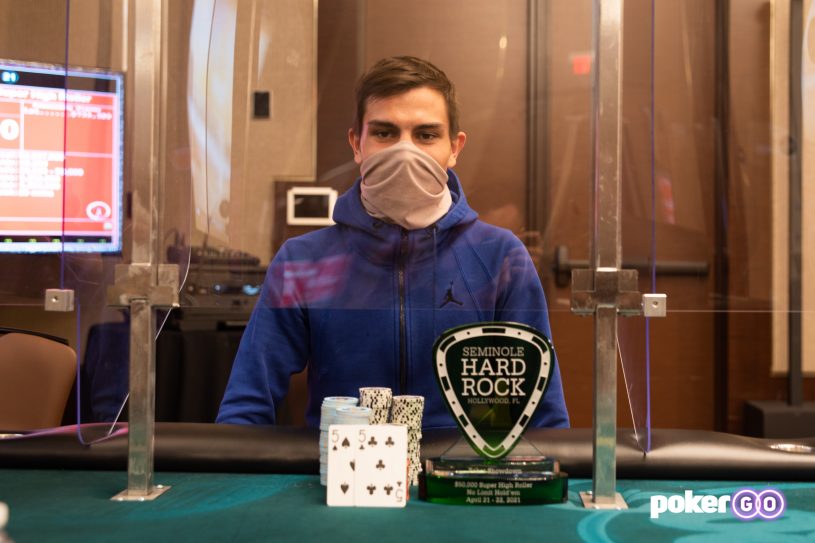 Following a bluff with nine-high against Seth Davies that left him with a single chip, Frenchman Arthur Conan went on an amazing run of double-ups and knockouts to parlay that one chip into all of them as he was crowned the $50,000 Super High Roller champion and awarded the $733,320 first-place prize.

The record-setting $50,000 Super High Roller attracted a total of 42 entrants on Day 1 to surpass the previous mark of 41. High roller regulars Alex Foxen, Ali Imsirovic, Darren Elias, Erik Seidel, Chris Hunichen, Dan Smith, Jake Schindler, and Jason Mercier all stumbled to the rail before it would be Aaron Van Blarcum being eliminated on the money bubble. Ilyas Muradi followed him out the door in seventh place as the final six players bagged their chips before returning for Day 2.

Chris Brewer led the final six players but was closely followed by Seth Davies and Sam Soverel while Sean Winter, Jeremy Ausmus, and Conan rounded out the rest of the final table. Ausmus would be the first to fall when his queen-ten was dominated by Brewer’s ace-queen to be eliminated in sixth place. Brewer continued to surge up the leaderboard before Winter would be left short and forced all-in with five-four and fail to improve against Davies’ pocket sevens to reduce the final table down to four players.

One of the biggest hands of the tournament followed shortly after which saw Conan raise the turn with a gutshot on Davies. Davies called, and then check-called a big river bet with two pair as Conan tapped the table in defeat and would be left with a single 25,000-denomination chip while sitting in the small blind where 15,000 of it would be committed. Conan then mounted an incredible comeback as he climbed to 100,000 in chips the next hand before break was called, and on play returning, he found three more doubles to sit just shy of one million in chips.

Conan then found a double into the chip lead when he rivered a straight against Davies. Davies day would come to an end shortly after when his trip aces were no match for Conan’s full house to leave a three-handed battle. Brewer then lost an all-in flip preflop when his ace-ten improved to a pair as Conan’s pocket sevens simultaneously improved to a flush. With Conan holding nearly 90% of the chips in play, the final hand would see Soverel all-in with king-nine and lose the runout against Conan’s pocket fives.

In this one event alone, Conan has nearly doubled his lifetime tournament earnings that previously sat at $752,676. His biggest live cash prior to this Super High Roller victory was a win in the WPTDS Marrakech High Roller for $83,918.

The PokerGO Live Reporting team will be on the floor of the Seminole Hard Rock Hotel & Casino to provide live updates of the $25,000 High Roller that begins on Monday, April 26, at 12 p.m. ET.