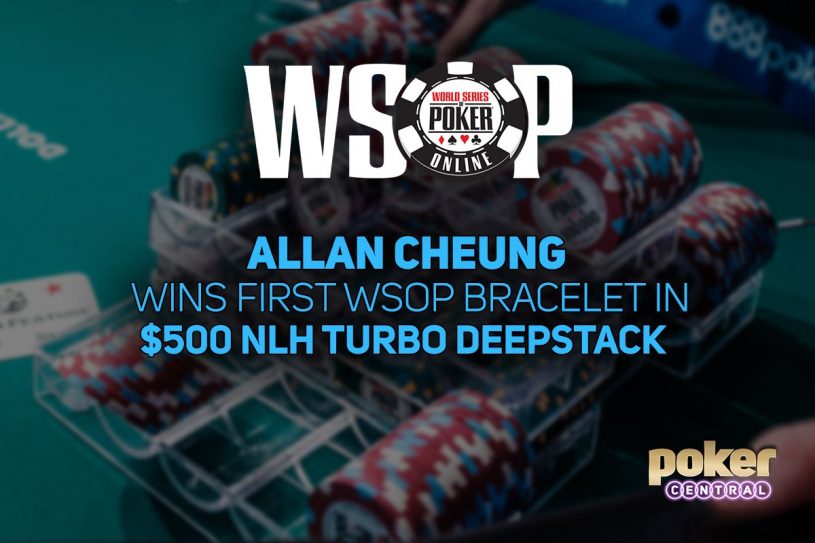 WPT Champions Club member Brian “JackBogle” Altman held a sizeable chip lead as the final table began. Robert “Nvrstsfied” Natividad would be the first to be eliminated when his pocket nines lost a race to the ace-queen of Myles “Shipthemoney” Kotler who finished runner-up in Event #18. Both Kara “theLMT90” Denning and Derek “this1smyvice” Salgals were the next two to go before Louie “pongpong” Valderrama would fall in sixth place when his ace-jack failed to improve against Daniel “juice” Buzgon’s pocket jacks. Last week Terrell “heezahustla” Cheatham won Event #16, and his run at becoming the first two-time WSOP Online winner this series would fall short in fifth place as he ran his ace-nine into Kotler’s ace-queen.

Both Buzgon and Altman would be the next to hit the rail as Kotler entered heads-up play holding a near two-to-one advantage over Cheung. Cheung only eliminated one player at the final table – and it would be the most important one. After doubling into the lead, Cheung delivered the final dagger when his ace-seven held true against Kotler’s ten-eight suited. Cheung spiked an ace on the turn, and with Kotler collected his second runner-up finish for the series, Cheung was crowned the Event #22 champion.

New York-native Cheung had collected three WSOP Online cashes heading into this event, and after topping the 1,579-entrant field to pocket the $120,083 first-place prize, he is now a WSOP bracelet winner.

Robert “BustinBalls” Kuhn is still leading on the back of his Event #3 win, while Ryan “Im.Sorry” Torgersen sits in second place. Michael “MiguelFiesta” Lech is third overall while Roland “prngls12” Israelashvili and Philip “tomte” Yeh round out the top five. To view the full leaderboard, click here.