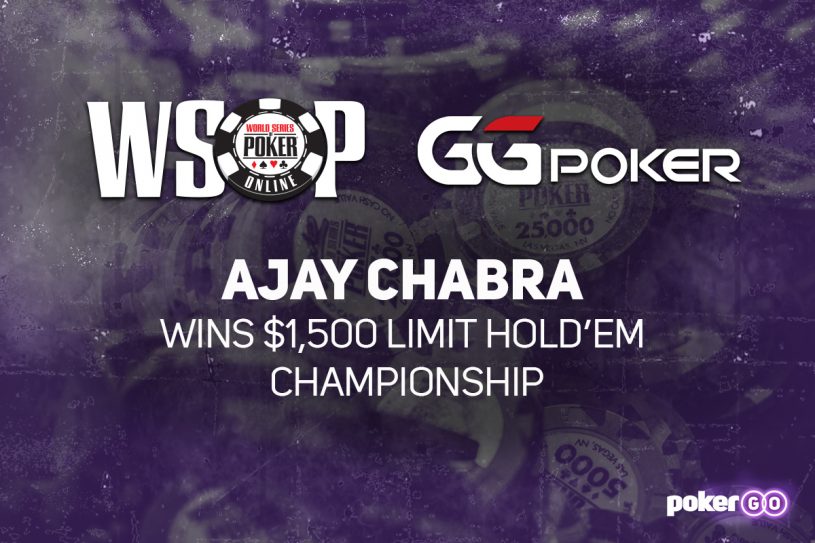 The 2020 World Series of Poker Online on GGPoker continued on Tuesday with Event #72: $1,500 Limit Hold’em Championship attracting a 337-entrant field which created a prize pool of $480,225. Following a previous two appearances at a final table, along with four top-ten finishes, Ajay “Ross_Geller” Chabra finally broke through to win his first WSOP bracelet and the $77,475 first-place prize after defeating Carter Swidler heads-up for the title.

The top 47 finishers would finish-in-the money, and after Belarmino De Souza was eliminated on the money bubble, the likes of Mark Herm, Alek Stasiak, Luke Schwartz, Georgios Sotiropoulos, Joseph Cheong, Anson Tsang, and Justin Lapka all collected a WSOP cash before falling short of the final table.

Kevin Liu entered the final table holding the chip lead, but it would Apti Dzhabrailov collecting the first two eliminations after eliminating Shannon Shorr in ninth-place, and Rich Dixon in eighth-place. Mike Watson had moved into the chip lead in the early part of the final table, and he would eliminate Liu with pocket jacks holding against pocket threes to further extend his advantage.

Dzmitry Yasiukevich would then fall in sixth when his nine-eight couldn’t outdraw the pocket aces of Chabra as the American now held the chip lead. Watson would be the next to fall in fifth when his queen-nine was outdrawn by the jack-seven of Swidler as Kosei Ichinose busted just a few hands later losing ace-jack to Swidler’s ace-five for a turned flush.

After a little back-and-forth between the final three, Dzhabrailov would exit in third-place as Chabra entered heads-up play holding a near two-to-one chip lead over Swidler. Swidler took the lead, then Chabra wrestled it back and then put his foot on the gas to edge his advantage out to the biggest of the match. On the final hand, Swidler found himself all-in on the flop with a pair against Chabra’s overcards. Chabra spiked a bigger pair on the turn, and when no help fell on the river for Swidler, he exited in second, and Chabra was crowned the Event #72 champion.