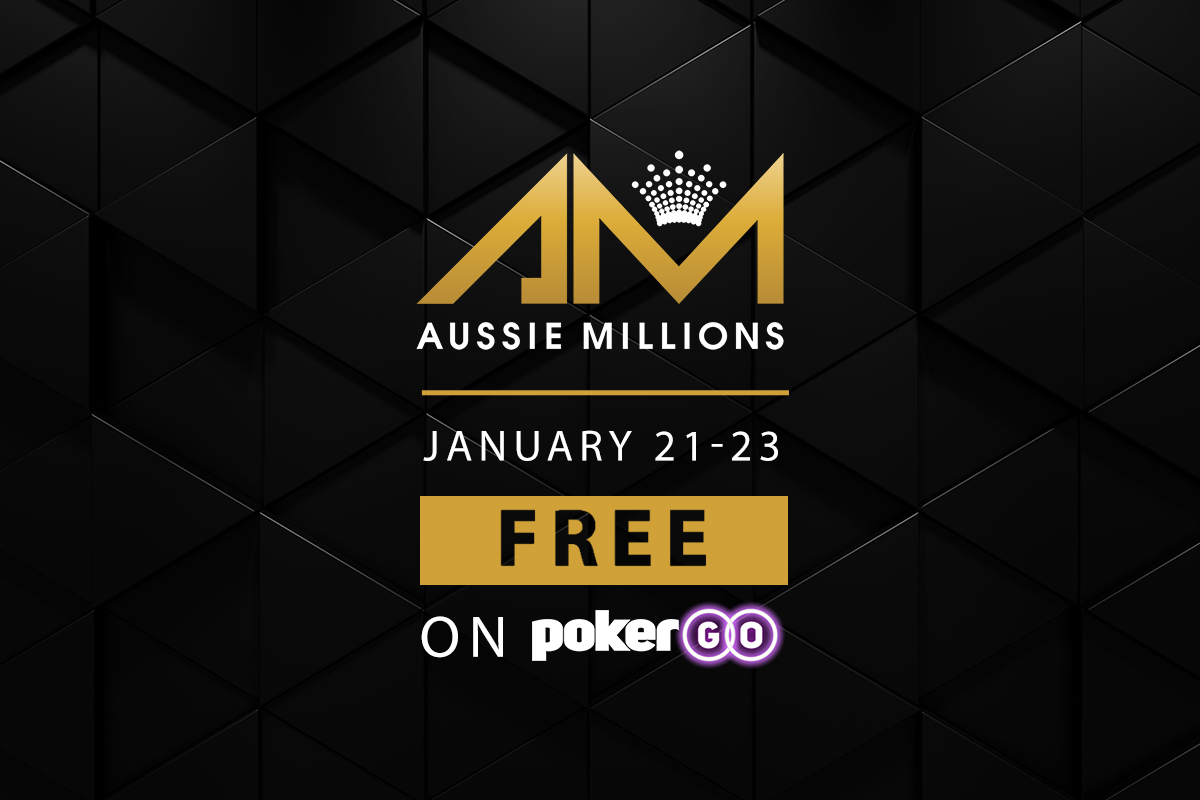 The 2020 Aussie Millions Main Event is available for free on PokerGO. Streaming dates reflected in ET.

Today, Crown Melbourne announced that for the fifth year running, Jason Somerville’s Twitch.tv account will be the broadcast partner along with OTT streaming platform PokerGO in collaboration with Poker Central and Run It Up streaming the 2020 Aussie Millions Poker Championship.

Twitch.tv, the world’s fasting-growing social video platform with more than 15,000,000 average daily visitors, will take one of the world’s most prestigious tournaments global by offering a unique Aussie Millions viewing experience. Somerville collaborating with Poker Central and Run It Up will live stream the 2020 Aussie Millions Main Event through his channel on Twitch.tv alongside free streaming on PokerGO from Wednesday 22 – Friday 24 January 2020 local time.

“Each year we look forward to working with Jason and his team and are excited to yet again collaborate in 2020”, says Tournament Director Joel Williams. “Poker fans from all around the world are able to be part of the entertainment and get unprecedented access to our Main Event via Jason and the team at Twitch. As one of the world’s great Poker tournaments, we are looking forward to building on this reputation with Jason and his team in 2020.”

“It is an honor to once again be collaborating with Crown Melbourne to host the 2020 Aussie Millions for the 5th executive year. It is an unparalleled player experience, which is why the tournament continues to grow to new heights each year. To be able to present the show live on Twitch is extremely rewarding,” says Somerville.

In 2019, Crown and Twitch.tv achieved the following highlights:

Jason Somerville is an American poker streamer and World Series of Poker Bracelet winner with 5 WSOP final table finishes and over USD$6,000,000 in lifetime tournament cashes.

As the founder and host of Run it UP, a live video streaming series hosted on Twitch.com, Jason holds the title as most-watched poker streamer of all time.

Since launching Run it UP on Twitch in 2014, hundreds of thousands of fans worldwide have spent nearly a billion minutes enjoying Jason’s live streaming content with over 30 million global non-unique visits.

He is the #1 Poker streamer on Twitch. Beyond having the largest following on Twitch for a poker-focused channel, he has also been anointed by Twitch as their flagship poker personality, making him a perfect match for Crown & the #AussieMillions.

At the cutting-edge of his craft, Jason is singlehandedly leading the charge to change the way the world views the game of poker.

Hosted by Crown Melbourne, one of the world’s leading integrated entertainment resorts, the Aussie Millions transforms Crown into a mecca of the poker world during the peak of the Australian Summer.

With a reputation that ranks it alongside the highly-acclaimed World Series of Poker, the Aussie Millions is the marquee event on the Asian-Pacific poker calendar. Since its inception in 1998, the tournament has grown into a major stop on the international poker circuit for the world’s greatest poker players

Crown Melbourne’s Tournament Director Joel Williams said “The 2019 Aussie Millions saw numerous records broken, which many thought were unachievable. The Main Event yet again broke through the magical 800-player barrier, defeating a record breaking Main Event field of 822 players. We can’t wait to see what the 2020 Series will bring. The poker stage has never been brighter and the team at Crown have been hard at work to make next year’s event even better than the last.”

There are few tournaments in the world that offer the kinds of prize pools that the Aussie Millions delivers each year, and in 2020 the schedule will comprise of 23 separate poker events with buy-ins ranging from AUD$1,150 to AUD$100,000. The comprehensive slate of the game’s most popular variations will be on offer and a total of 22 coveted Aussie Millions ANTON Jewellery ‘Championship Rings’ will be awarded to each event winner, in addition to the coveted Main Event Bracelet. New in 2020 is the $25K Pot Limit Omaha which, will prove to be an extremely competitive event.

The prize pools provide a substantial incentive to travel and, in addition, each winner will receive a ‘Championship Ring’ for their victory. While the entry fees may sit outside the budget of some players, everyone can qualify via the countless satellite tournaments held during the year and during the event itself, offering players the chance to win a place in the coveted Aussie Millions ‘Main Event’ for a fraction of the AUD$10,600 entry fee.

Nearly 100 poker tables will be set up across the award-winning complex to accommodate the thousands of players from around the world who attend Asia-Pacific’s largest poker event. In terms of prize money, the prestigious Aussie Millions ‘Main Event’ shares the limelight with some of Australia’s other major events including the Melbourne Cup, Australian Open and the AFL Grand Final.

Check out the Live Events tab on PokerGO to see the latest schedule of events.