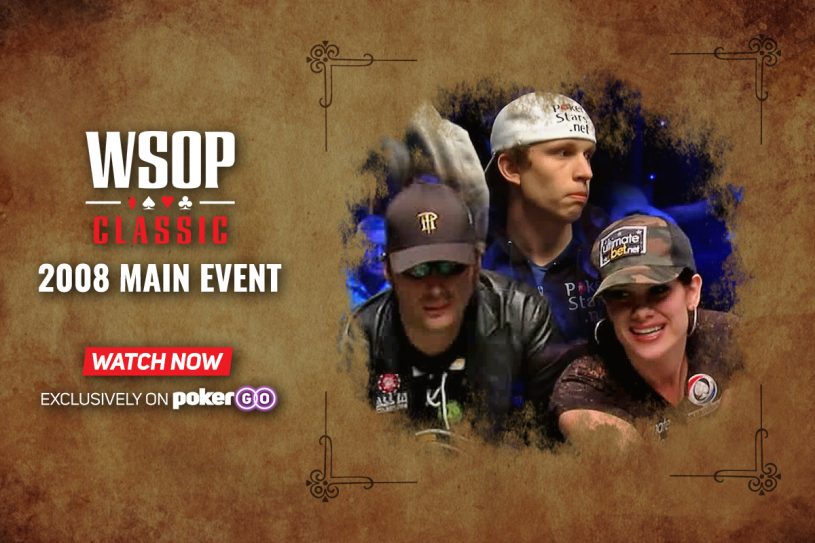 After a record-setting year in 2006, the numbers dropped slightly in 2007. However, the 2008 WSOP Main Event would see a rebound as 6,844 players created a prize pool of over $64.3 million. Another mix of players would reach the final table with four countries represented – Canada, Russia, Denmark, and the United States – but the biggest change would be the introduction of the November Nine.

Once the final table was reached, the final nine players wouldn’t return to the Rio All-Suite Hotel & Casino until November 11 to conclude the final table. On the first night, the final nine were reduced to two, and the second night would see Denmark’s Peter Eastgate defeat Russia’s Ivan Demidov heads-up to win the $9,152,416 first-place. Eastgate’s win not only marked the first WSOP Main Event winner from Denmark, but it also saw Eastgate become the youngest WSOP Main Event champion at the age of 22 – surpassing Phil Hellmuth who was 24 when he won in 1989.

There are 19 episodes from the 2008 WSOP Main Event available now on PokerGO, and coverage begins with play from the four opening flights. The coverage is dominated by poker’s biggest personalities as Phil Hellmuth, Mike Matusow, Scotty Nguyen, and Daniel Negreanu take center stage on the feature table. Day 2 coverage would see 2003 World Champion Chris Moneymaker and defending 2007 World Champion Jerry Yang in action.

As the tournament progresses through the money bubble on Day 3, some new faces begin to emerge as Jean-Robert Bellande joins Phil Hellmuth at the feature table to start Day 4. Chino Rheem holds court at the feature table on Day 5, and he is joined by Tiffany Michelle and veterans Hellmuth and Matusow. The emergence of Michelle continues on Day 6, while Dennis Phillips and Kelly Kim are highlighted as they make their run towards reaching the November Nine. The final three episodes see the field trimmed from 27 down to 18, and then 18 down to the final table. Following nearly a four-month hiatus, the final nine returned to play down to the winner where it would be Eastgate collecting the $9,152,416 first-place prize while being crowned the winner of the 2008 WSOP Main Event.

The 2008 WSOP Main Event was broadcast on ESPN and is now available on PokerGO. Select your favorite episode from the overview below and start watching right now.