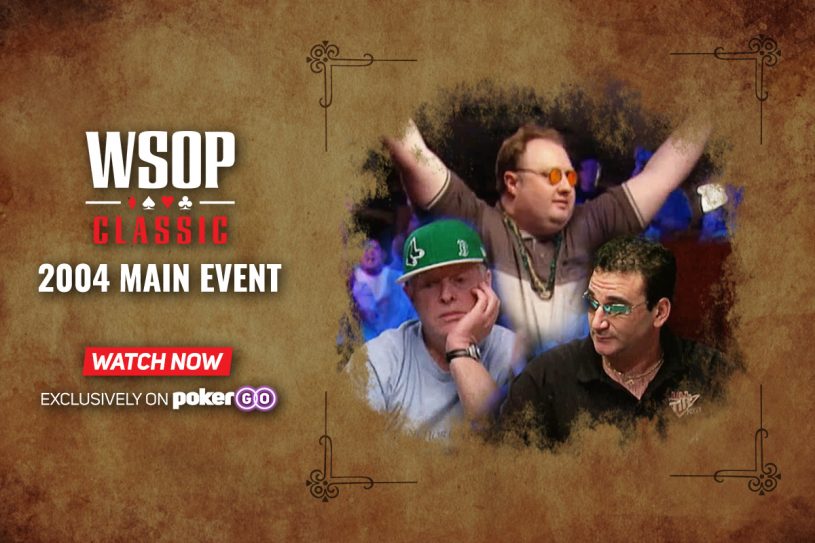 The 2004 World Series of Poker Main Event broke new ground in the first two days of play. It was the first Main Event to play ten-handed, while also being the first to split Day 1 into two opening flights. This was all on the back of Chris Moneymaker’s improbable victory a year previously that would forever change poker.

The favorite at the final table was 1995 World Champion Dan Harrington who had finished third behind Moneymaker and Sammy Farha in 2003. However, Harrington’s run would end in fourth-place, and after new faces Josh Arieh bowed out in third and David Williams finished in second, it would be Greg “FossilMan” Raymer collecting the $5 million first-place prize along with being crowned the 2004 World Champion.

Poker players and fans around the world recall watching the 2004 WSOP Main Event on ESPN as poker really began to gather momentum. Following seven episodes in 2003, there would be ten episodes in 2004 with Day 1 split over the first two episodes. Defending champion Chris Moneymaker would be front-and-center on episode one along with Men Nguyen, and Daniel Negreanu. While in episode two, Sammy Farha would be the highlight on the feature table along with 2000 World Champion Chris Ferguson.

“I never really felt it in the moment,” Raymer said regarding the pressure. “I’m fairly unemotional when I play poker.”

The highlight of the coverage was the final four episodes. The final episode was the final table, but episodes seven, eight, and nine followed Day 6 of the Main Event. On this Run it Back with Greg Raymer | 2004 World Series of Poker video, Remko Rinkema speaks with Raymer as they watch the action from Day 6.

Raymer discusses how he was feeling on Day 6, while also giving up some information on other players still in the tournament as action continued down to the final table.

The 2004 WSOP Main Event was broadcast on ESPN and is now available on PokerGO. Select your favorite episode from the overview below and start watching right now.